For large numbers of people, Barack Obama's election is a reason to believe that change is possible--and that what they did mattered in making it.

MILLIONS OF people jammed into Washington, D.C., to see history being made yesterday, and to celebrate the official beginning of a new era in American politics.

A sea of people packed into the vast mall area in front of the Capitol building. Around the country, there were gatherings in schools, in auditoriums and theaters, in front of jumbo-trons set out in city streets. Across the world, too, millions watched the first African American president take office.

These images couldn't be more of a contrast to eight years ago, when George W. Bush scurried into the White House, thanks to a 5-4 decision of the U.S. Supreme Court not to count every vote in the 2000 election. Bush's inauguration was a meager gathering of political insiders, conservative cranks and corporate lobbyists, with angry protesters lining the inaugural parade route.

The end of the Bush regime was bound to be a cause for celebration for the millions of people who hated what the administration stood for--the "war on terror," contempt for the poor and working people, a bigoted right-wing agenda. There was no more satisfying sight than Bush climbing the stairs to his helicopter and flying away. 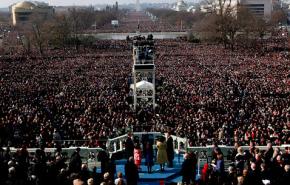 But the inauguration of Barack Obama meant much more than the end of Bush. Standing outside a Capitol built by slave labor, Obama took the oath to assume the presidency, an office held mostly by slaveowners for the first seven decades of America's existence. No wonder so many thought they would never see the day that an African American would be elected to the White House.

That achievement--the inauguration of a man who wouldn't have been served a cup of coffee in Washington a few generations ago, and who couldn't have hoped to win the presidency not that many years ago--dominated every moment of the proceedings.

It couldn't be otherwise with the countless Black faces throughout the vast crowd in Washington--and with the sense of pride, extending beyond African Americans alone, that some of the cruel sins of America's past were finally being overcome.

Among those who figured out a way to get to Washington, and waited for hours for a spot on the Mall or along the parade route, there was a sense of pride, too, in their contribution to this day--that the achievement was not Obama's alone. His oft-repeated slogan "We are the change we have been waiting for" speaks for many people who see in his election a reason to believe that change is possible--and what they did mattered in making it.

The reverent tone among this huge audience was at odds with the fake pomp on the Capitol steps itself--a ceremony stage-managed according to 18th-century protocol and presided over by political leaders with a history of resisting everything those in the crowd want to accomplish.

The low point was an opening prayer by Rick Warren, the anti-gay, anti-abortion pastor of the Saddleback mega-church. Warren's pious rhetoric about "treating our fellow human beings with respect" was so much hollow cant coming from a man who compares same-sex marriage to incest and pedophilia.

Obama's own team managed to add a further bitter note to this episode. At a Sunday concert at the Lincoln Memorial, Bishop V. Gene Robinson, the first openly gay bishop in the Episcopal Church, was invited to give the opening prayer, in what supporters of LGBT rights were encouraged to see as a concession to their anger about Warren. But the Presidential Inaugural Committee instructed HBO not to include Robinson's politically charged invocation in the two-hour television broadcast of the concert.

THIS CONFLICT between the hopes inspired by Obama's promise of change and the compromises on the basic principles held by those who worked to put him in office ran through the inaugural speech.

The address was full of historical references to those who built America--people who "toiled in sweatshops and settled the West; endured the lash of the whip and plowed the hard earth." But Obama used those images to propose that working people must shoulder the burden of dealing with the economic crisis. "What is required of us now is a new era of responsibility," he said.

In describing the crisis, Obama said, "Our economy is badly weakened, a consequence of greed and irresponsibility on the part of some, but also our collective failure to make hard choices and prepare the nation for a new age."

The millions of people suffering the brunt of the crisis didn't "fail" to make a "hard choice" about the rampant greed and speculation on Wall Street that pushed the financial system off a cliff. They weren't given any choice at all, and now they're being asked to pay for a disaster they had no part in causing.

But spreading the blame for the crisis is the prelude to spreading the sacrifice--shared sacrifice, when the prosperity that came before wasn't shared at all, but was enjoyed entirely by the rich.

Millions of people in this country would be prepared to accept personal sacrifice in order to achieve social goals--a genuine national health care program, for example, or improved public schools. And many among those people may heed Obama's call to public service to help make such changes.

But in recent weeks, Obama's emphasis has been on sacrifice and patience, rather than the radical change the country urgently needs. Thus, in the days ahead, Obama and Congress are expected to approve spending on the second half of the $700 billion Wall Street bailout that saves the banks, but offers nothing to millions of people in danger of losing their homes.

Obama's comments on foreign policy were similarly double-edged. He struck a different tone than Bush, offering to the Muslim world "a new way forward, based on mutual interest and mutual respect."

Yet over the past month, Obama was silent during Israel's slaughter of more than 1,300 Palestinians in Gaza--a war on a defenseless people, carried out with U.S.-built F-16 fighter jets and Apache helicopters, and following a U.S.-backed blockade that cut off food and medicine to one of the most densely populated areas on Earth.

In another rhetorical shift from Bush administration policy, Obama said he would "reject as false the choice between our safety and our ideals"--a pointed criticism of the shredding of civil liberties under Bush. Yet he also claimed that "[o]ur nation is at war against a far-reaching network of violence and hatred"--a line that could have come from Bush's speechwriters.

OBAMA'S CALL for all Americans to unite and work together to overcome adversity--to "pick ourselves up, dust ourselves off, and begin again the work of remaking America"--is a time-honored cliché for American political leaders.

But there's one thing about this message when it comes from Obama that is important to note. To millions of people, it is a call to do something. And what people do in the coming months and years will be key in determining what change comes to U.S. society.

The Obama campaign has had a profound impact. After a generation of the conservative agenda dominating in Washington, when the White House and Congress seemed wholly insulated from any influence by ordinary people, Obama's victory convinced large numbers of people of some basic sentiments at the heart of the great struggles of the past--that something different is possible, and that what we do matters.

But there's another lesson to be drawn from the experience of the civil rights movement, the fight for women's suffrage and the struggle for unions: Their strength rested on the willingness to remain independent and mobilize for justice, no matter what president was sitting in the White House.

Obama himself gave voice to these lessons about how social change is made in an answer to a question about Dr. Martin Luther King Jr. at a Democratic candidates' debate during the early primaries. His words were extraordinary coming from a politician who would end up in the Oval Office a year later:

I believe change does not happen from the top down. It happens from the bottom up. Dr. King understood that.

It was those women who were willing to walk instead of ride the bus, union workers who are willing to take on violence and intimidation to get the right to organize. It was women who decided, "I'm as smart as my husband. I'd better get the right to vote." Them arguing, mobilizing, agitating and ultimately forcing elected officials to be accountable. I think that's the key...

Now that he occupies the top political office of the most powerful capitalist society on earth, Obama and his administration will have their own ideas about what change should look like, and what it shouldn't--and those ideas won't be the same as the millions of people who worked to get him elected.

But the most fundamental changes in society do happen from the bottom up. And it's up to the people who want to see that change to use all the opportunities presented to us in this new era of Barack Obama--to argue, to mobilize and to agitate.