After three years of losing ground against a growing Afghan resistance, the U.S. government is continuing a troop buildup begun by George W. Bush. In February, Barack Obama ordered the Pentagon to double the number of U.S. combat brigades with the addition of 17,000 new troops, a number that could eventually reach 30,000.

Afghan opinion, once widely in favor of the U.S./NATO occupation, is now divided. Much of the erosion of support has come because of an increase in civilian casualties as the war has intensified. Kabul-based political analyst Waheed Muzjda told the Christian Science Monitor that "at least half the country is deeply suspicious of the new troops. The U.S. will have to wage an intense hearts-and-minds campaign to turn this situation around."

Anand Gopal, the Kabul correspondent for the Monitor, talked to David Whitehouse about the escalation of the war and the different ways Afghans are responding.

WHAT WILL the effect of deploying more U.S. troops be on the military situation, and on the attempt to win Afghan support for the war?

In reality, it will most likely be just the opposite. That is because most of these aerial strikes are associated with so-called "close contact" situations: Troops are engaged in direct combat or have just done so, and they call in air raids. These raids provide a supporting function to the troops on the ground. So more troops on the ground will most likely mean more air raids to support them.

These are the reasons why we have seen civilian casualties skyrocket over the last few years. It's not that the Americans have changed to a more casualty-inducing strategy; it's merely because there has been a large increase of troops over this period. 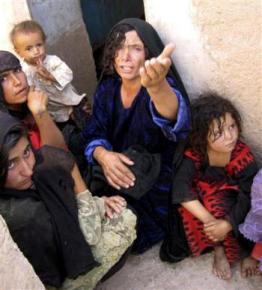 The brunt of the fighting has been in the Pashtun areas of the south and east. The Pashtuns in these areas are mostly opposed to troop increases, for the simple reason that it will mean more bloodshed, more civilian casualties and more Taliban reprisals.

In the north, which is dominated by non-Pashtun ethnic minorities, there is much more support for the troops. Again, this is for the simple reason that the troops won't actually be deployed to these areas, but rather to the volatile south. In addition, these ethnic groups view the Western forces as a buffer to the Pashtuns and the Taliban.

The ethnic divisions in Afghanistan run very deep. Unlike Iraq, which had relatively small divisions between Sunnis and Shias until the U.S. invasion, Afghanistan has been through an extremely bloody civil war in the 1990s that pitted the various ethnic groups against one another. The scars of this war have not healed.

AFGHAN CITIES have grown significantly during 30 years of war, so that 30 percent of Afghanistan's 27 million people now live in urban centers. What is the impact of this on U.S. strategy?

WHILE THE last few years have certainly seen migration to the cities--Kabul, for example, saw a population boom after the fall of the Taliban--Afghanistan still ranks only 181 out of 199 countries in terms of the percentage of the population living in urban areas. By comparison, Iraq ranks 68th.

Afghan cities are extremely small by modern standards--only Kabul has more than 500,000 people. Most of the urban centers, especially in the Pashtun areas of the south, are remarkably tiny, and resemble small villages of other countries. The capital of Logar province, for example, consists of a crossroads with a few shops.

In Wardak province, where 1,500 new American troops recently landed, only 0.5 percent of the population lives in an urban area. The American troops and Afghan government control the provincial capital, which is the largest city in the province and has a population of about 3,000. The vast swathes of countryside, however, are either not under the control of anyone, or are under the control of the Taliban. A similar situation persists in most other Pashtun provinces.

The point is that this is a fundamentally rural society, one that is radically different than Iraq. If you could somehow win control of a provincial capital like Falluja or Basra, you'd be able to exert control on the surrounding countryside, since the population's center of gravity is in the cities. But in Afghanistan, if you won control of a provincial capital, you've really done nothing at all.

This is the problem the Afghan government and the Americans are facing, and nothing short of troops in every village, which would add up to hundreds of thousands, could get around this. And hundreds of thousands of troops--in every six-house or eight-house village--would most likely not be acceptable to the villagers, for reasons already mentioned.

DO URBAN opponents of the occupation identify with the Taliban, or are there distinctions?

THE TALIBAN is predominantly a rural force, although it has urban sympathizers in places like Kandahar city and Kabul. There has been some migration of rural villagers to urban centers like Kandahar, which accounts for their support within the cities.

The Taliban almost entirely tailor their message to the rural population, and their world view is heavily influenced by rural life. Most urban opponents of the Americans don't identify with the Taliban, very much for these reasons.

In the West, the Taliban are often seen as imposing their puritanical vision on an unwilling society, but in reality, the Taliban's ideology is an extension of rural Pashtun ideology. Absolutely nowhere in the Pashtun countryside will you see a woman without a burqa, and in most cases, you won't see women at all--they are cloistered in the home. This is true regardless of the Taliban presence in the area. Most Pashtun villagers I've met are opposed to educating girls past puberty.

In traditional Afghan society, village chiefs and tribal heads held the land and the power. However, the years of Soviet invasion [1979-89] saw a partial breakdown in tribal structures. The Soviets targeted the tribal chiefs during their intervention here, by killing them and trying to break up their land. This was part of a Communist attempt to modernize the economy, and shift the emphasis toward the town and away from the country.

The tribal chiefs fought back and tried to defend their land and wealth, and recruited mullahs to the cause. Eventually, many of the village chiefs were killed or co-opted, while the mullahs were getting American largesse. This combination enabled the mullahs to function as a relatively distinct social force, but they remain tied to a rural outlook and way of life.

When the Taliban strode into Kabul in 1996 and took power, many of their members had never before seen a city. And that remains true today.

WHEN THE Taliban arose in the 1990s as a force fighting to replace the rule of Afghan warlords, it had a narrow religious foundation and a significant base among only one of the country's ethnic groups, the Pashtuns. Now that its opponent is an external force, has the Taliban changed to broaden its appeal and to construct a truly national base?

BECAUSE THE Taliban's ideology is an extension of the rural Pashun ideology, they are seen as an alien force in the rest of the country.

The rural Pashtun way of life is significantly different from, say, the Hazaras of the central highlands. When traveling in the Hazara areas, you will see, for example, that women can move outside the house, and some might not even wear the burqa. And the Hazaras are Shia Muslims, whereas the Pashtuns are Sunnis, and the Taliban follow a specific school of Sunni Islam called Deobandi.

The Taliban's ideology has transformed somewhat over the years, and now they talk in nationalist terms (about expelling foreign occupiers, for example) as much as they talk about their specific interpretation of Islam. But they completely lack the ability to broaden their appeal beyond the Pashtuns.

This is because they remain a rural force, and their conception of Islam is very Pashtunized. The non-Pashtun ethnic groups view the Americans as the lesser of two evils when compared to the Taliban, since the Americans have not tried to fundamentally reorder village life in the way the Taliban attempted in the 1990s. If these ethnic groups were to turn against the Americans for any reason, they would most likely form their own resistance groups, and would never even ally with the Taliban.

Because of this, it is difficult to see the Taliban as a force of national liberation, since they would most likely never be able to rally non-Pashtuns (that is, 60 percent of society) to their cause.

Moreover, the Taliban should not even be considered a Pashtun nationalist movement, as is commonly claimed. Afghanistan has long history of Pashtun nationalism--there are 12 million Pashtuns in Afghanistan and 25 million in Pakistan, and there is widespread support among these people for a united Pashtunistan. Most Pashtun nationalist groups on both sides of the Afghan-Pakistan border are secular and have a much stronger urban base.

The Taliban never talks about Pashtunistan, and whenever I ask Taliban commanders about the issue, they downplay it. And the Taliban government of the 1990s never made an attempt to address the Pashtunistan issue (which is understandable since the Taliban's principle patron, Pakistan, is strongly opposed to Pashtun nationalism). They are merely an Islamist movement that happens to be Pashtun, and hold a very Pashunized version of Islam.