Calling for a coal moratorium

Ted Nace is the author of Gangs of America: The Rise of Corporate America and the Disabling of Democracy. In 1985, he founded Peachpit Press and has worked as a freelance writer and served as staff director of the Dakota Resource Council.

More recently, Nace turned his energies toward the anti-coal movement and co-founded CoalSwarm, created in collaboration with the Center for Media and Democracy, which provides an ever-expanding body of online information for anyone to access and contribute to. CoalSwarm is a project of the Earth Island Institute, which was founded by environmental pioneer David Brower.

Nace spoke with Joshua Frank about CoalSwarm, the Obama administration's energy policy and the current state of the anti-coal movement. Frank is the author of Left Out! How Liberals Helped Reelect George W. Bush and, with Jeffrey St. Clair, Red State Rebels: Tales of Grassroots Resistance in the Heartland.

COALSWARM SEEMS like a pretty interactive way to keep up on coal issues throughout the country, one where anyone can get involved. Can you explain a bit about how it works and what CoalSwarm's objectives are?

CLIMATE SCIENTISTS say there's a planetary emergency, and that coal is key. In fact, NASA's James Hansen points out that coal is such a carbon-intensive and abundant fuel that a 20-year phase-out in coal emissions is "80 percent of the solution to the global warming crisis." But a lot has to happen quickly.

We believe in the swarm concept where all sorts of people attack a problem from different directions. CoalSwarm lets people post and access information freely, using the same software as Wikipedia. It's like a memory bank for the activist brain.

HOW LONG has CoalSwarm been up and running, and how does this online resource sharing translate into on-the-ground activism?

IT STARTED at the beginning of 2008 and now has over 1,500 wiki pages. We estimate about 1.2 million visits to date. Most people find our stuff through Google searches. We really have no idea how people are using the information other than to observe that the hottest pages invariably reflect the cutting edge of organizing. 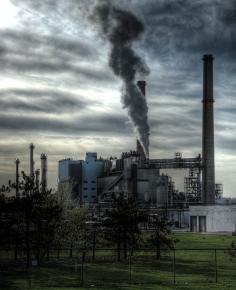 YOU'VE HAD experience in community organizing, especially around rural environmental type issues. What are some of your ideas on how people can organize to shut down the existing 600 coal plants in the U.S.?

TO PHASE out all these coal plants and bring in alternatives, federal and state action is obviously going to be necessary, such as renewable portfolio standards or steadily tightening carbon dioxide emissions thresholds. I personally like the "cash for clunkers" notion, because it's so straightforward. But local organizing initiatives are vital because they produce the movement energy and the models that ultimately drive action on the larger stage.

Any place with a coal plant is a good place to start. Scores of college campuses burn coal. There are plants in over 30 cities larger than 50,000 people. Old plants facing retrofits are another opportunity. Right now, a great coalition of businesspeople and environmentalists has assembled in New Hampshire to shut down the Merrimack Station, rather than retrofit it with expensive scrubbers. Coalitions can accomplish a great deal.

I'm impressed by the Just Transition Coalition that has involved numerous grassroots groups around the closure of the Mohave Generating Station. It includes the Indigenous Environmental Network, the Black Mesa Water Coalition, Grand Canyon Trust, To'Nizhoni Ani and the Sierra Club, among others. It's a local effort with national implications.

In every community with a coal plant, there are existing groups that can network together to plan a clean future with better jobs for mine and plant workers. The military has experience with this sort of thing. For example, the Base Realignment and Closure (BRAC) process has closed 350 military bases since 1988 and helped communities and workers make the transition.

PRESIDENT OBAMA seems to be adopting a rather favorable view of so-called "clean coal." Most of the Beltway Greens, such as the Sierra Club, don't seem to be putting up much of a fight against the Obama administration on this. How do you think this affects efforts to shut down coal-burning plants locally?

WELL, I definitely wouldn't lump the Sierra Club with the other Big Green groups. Sierra's grassroots work has been great, and their record on stopping coal plants is exceptional. And I do think that the large environmental groups have recently done some very funny ads lampooning the "clean coal" message. Check out the Coen brothers' "spray can" piece from the Reality Campaign, which is financed by the Big Green groups. Obama too has done some good stuff at the agency level on carbon dioxide, mercury, mountaintop removal and synfuels--all negative for coal.

But I do think we're missing a much bigger point here, which is that the work of laying out the bigger vision for the public--that there's a planetary emergency and that it's preventable--just isn't happening. Look, we're extremely lucky that the U.S. has a head climate scientist at NASA, James Hansen, who is willing to lay down a clear roadmap to the danger we're facing and how to get out of it.

His "zero coal emissions by 2030" mandate is technically and financially feasible, but somebody has to lay out "zero coal" as an explicit national goal. The large environmental groups haven't articulated this, so it's no wonder Obama hasn't. Big Green's agenda for Obama was contained in a 391-page white paper entitled "Transition to Green."

Amazingly, the entire document doesn't include anything about the relation between coal and climate change, doesn't call for a coal moratorium and doesn't call for a phase-out of coal. For Big Greens to lay out a 391-page policy statement and ignore the explicit call of climate scientists for "zero coal" is kind of like B'nai B'rith talking about European history and forgetting to mention the Holocaust.

Many environmentalists view this market model as a way to let big polluters off the hook as these corporations can simply relocate or build new infrastructure and industry in places where there are few or no carbon regulations. What's your take on this? If what we need is to call for a coal moratorium, isn't cap and trade the wrong approach?

Those programs have so many leaks, trap doors and perverse side effects that they'll probably do more harm than good. One of the worst things about enacting a compromised cap and trade program is that it will trick people into thinking that a solution has been implemented. The illusion that a solution is in place will then prevent simpler, more focused solutions from being implemented.

An example of this phenomenon is the sulfur trading system. Proponents of cap and trade point to it as proof that pollution markets work, but decades after the program went into place, I can show you a big database of coal plants that continue to spew inordinate amounts of sulfur dioxide.

A simpler solution to the global warming problem would be to mandate that all the existing coal plants be phased in an orderly, phased manner, with protection for workers and government assistance for building clean replacements such as efficiency measures, wind, solar thermal, solar photovoltaic and geothermal.

The cost of such a transition would be less than a third of 1 percent of Gross Domestic Product. You don't even have to believe that global warming is a definite risk--only that it's worth paying a trivial price for what amounts to an insurance policy, just in case the climate scientists are right.

SO WHAT can people concerned about climate change, and in particular coal production, do to help close down these facilities?

THERE'S A list of hundreds of grassroots groups working on coal issues at the Coal Moratorium Now! Web site. Every one of them is underfunded and understaffed, and they'd love to get a call or an e-mail offering some held. Tell them what you're good at; commit to a few hours a month. Do some research, take part in a protest. I guarantee you'll meet some amazing people.