The appeal that Obama refused

In the aftermath of the tragic shooting at Fort Hood, Barack Obama paid a visit to a barracks on the U.S. Army base outside Killeen, Texas.

Michael Kern, president of the Fort Hood chapter of Iraq Veterans Against the War (IVAW), waited his turn to shake hands with the president like everyone else. When Obama approached him with his hand outstretched, Michael attempted to give the president a letter, saying, "Sir, IVAW has some concerns we'd like for you to address."

Obama dropped his hand and went on to speak to the next soldier, and the Secret Service took the letter. Here, we publish the statement from the IVAW that Obama wouldn't accept.

In your recent comments on the Fort Hood tragedy, you stated, "These are men and women who have made the selfless and courageous decision to risk and at times give their lives to protect the rest of us on a daily basis. It's difficult enough when we lose these brave Americans in battles overseas. It is horrifying that they should come under fire at an Army base on American soil." Sir, we have been losing these brave Americans on American soil for years, due to the mental health problems that come after deployment, which include post-traumatic stress disorder and, often, suicide.

You also said, "We will continue to support the community with the full resources of the federal government." Sir, we appreciate that--but what we need is not more FBI or Homeland Security personnel swarming Fort Hood. What we need is full mental health care for all soldiers serving in the Army. What happened at Fort Hood has made it abundantly clear that the military mental health system, and our soldiers, are broken. 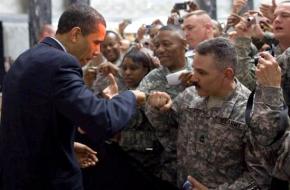 You said, "We will make sure that we will get answers to every single question about this terrible incident." Sir, one of the answers is self-evident: that a strained military cannot continue without better mental health care for all soldiers.

You stated that "As Commander-in-Chief, there's no greater honor but also no greater responsibility for me than to make sure that the extraordinary men and women in uniform are properly cared for." Sir, we urge you to carry out your promise and ensure that our servicemembers indeed have access to quality mental health care.

The Army has only 408 psychiatrists--military, civilian and contractors--serving about 553,000 active-duty troops around the world. This is far too few, and the providers who exist are often not competent professionals, as this incident shows. Military wages cannot attract the quality psychiatrists we need to care for these returning soldiers.

1. Each soldier about to be deployed and returning from deployment be assigned a mental health provider who will reach out to them, rather than requiring them to initiate the search for help.

2. Ensure that the stigma of seeking care for mental health issues is removed for soldiers at all levels--from junior enlisted to senior enlisted and officers alike.

4. Ensure that soldiers are prevented from deploying with mental health problems and issues.

6. Ensure full background checks for all mental health providers and periodic check-ups for them to decompress from the stresses they shoulder, from the soldiers they counsel to the workload they endure.

Sir, we hope that you will make the decision not to deploy one single Fort Hood troop without ensuring that all have had access to fair and impartial mental health screening and treatment.

You have stated on a number of occasions, starting during your campaign, how important our military and veterans are to this nation. The best way to safeguard the soldiers of this nation is to provide ALL soldiers with immediate, personal and professional mental health resources.