The year of frustrated hopes

Why has Barack Obama disappointed his supporters on so many issues?

ONE YEAR ago, millions of people were in Washington for the inauguration of Barack Obama as president.

They wanted to witness history being made--the first African American president taking the oath of office in a land built on slavery. But they were also celebrating the end of the long years of Republican dominance in Washington and the expectation that a new era was beginning in U.S. politics.

Obama's oft-repeated statement from the campaign spoke to the hopes of millions of people: "We are the change we have been waiting for."

One year later, we're still waiting--and the idea that Barack Obama is part of anything to do with change seems like a joke. The disillusionment in Obama has left many people wondering if they were wrong to hope at all.

True, expectations in the new administration a year ago were so high that Obama was bound to disappoint. As USA Today summarized the results of a poll at the time:

Eight in 10 said he will improve conditions for minorities and the poor, and 76 percent said he'll increase respect for the United States abroad. About seven in 10 said he'll be able to improve education and the environment. More than 60 percent said he will reduce unemployment, bring U.S. troops home from Iraq, improve the health care system, create a strong economic recovery and keep the U.S. safe from terrorism. More than half said he will be able to bring troops home from Afghanistan, reduce U.S. oil dependence, heal political divisions and control federal spending. 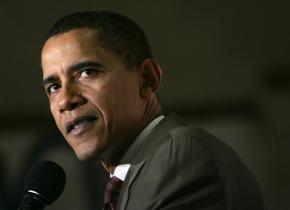 That's how strong the faith in the new administration was--a majority of people thought Obama would bring home troops from Afghanistan, even though he explicitly promised to escalate that war.

But the bitterness about Barack Obama goes far beyond Afghanistan--it's the failure of the administration to accomplish anything that was expected of it that's feeding a sense of demoralization.

Obama had the opportunity to change the direction of U.S. politics and society--and the popularity to accomplish it. Even those on the left, like us at Socialist Worker, who were skeptical of Obama's promises concluded that the multiple crises facing the White House would compel the president to move away from the free-market, neoliberal policies that characterized not only Bush, but the Clinton administration before him.

As we wrote in an editorial right after the election:

The difference is that Obama has become president after the discrediting of the right-wing agenda that dominated U.S. politics for the last three decades, including the Clinton years. On the economy especially, Obama faces a severe crisis that won't respond to the tame government measures popular with policymakers in the neoliberal era...

In short, the scale of the problems and questions the U.S. faces--not just economically, but in the areas of foreign policy and more--is driving Obama toward a different agenda.

On the contrary, instead of using economic policies to counteract the worst mass unemployment since the 1930s, Obama rushed to aid the banks. Government loans, investments or guarantees to banks and other financial institutions amounted to some $13 trillion--nearly the size of the entire annual economic output of the U.S.

For the rest of us, there were only crumbs: A mortgage relief program that benefited just a fraction of hard-pressed homeowners, a modest tax break and an underpowered economic stimulus plan that diverted money into tax cuts rather than job creation.

Next in line was the Pentagon brass, which got an increase in defense spending beyond what Bush had proposed--and a $30 billion, 30,000-troop "surge" in Afghanistan. On health care, the White House outsourced the details of reform legislation to members of Congress like Sen. Max Baucus, a wholly owned subsidiary of the health insurance industry."

WHY HAS Obama been such a disappointment--seemingly in thrall to all the dogmas and policies that were discredited by the self-destruction of the Bush administration?

In fact, Obama was never a maverick or a reformer. As Socialist Worker pointed out in 2008:

For all his ability to galvanize working people and youth to get out the vote, his campaign relied on huge amounts of money from corporate donors, allowing him to spend an estimated $650 million, by far the most in U.S. history. To tap those funds, Obama, the former community organizer, abandoned the public financing system that was established to counteract the role of big money in politics.

The other factor in judgments about Obama a year ago was whether he would face pressure from below to deliver on his rhetorical promises of change. As we wrote:

[T]he exact shape of [Obama's] agenda will be determined by how much pressure he feels from below. Will his economic team at first fall back on familiar neoliberal prescriptions, or will they turn to a more dramatic intervention? Obama has said he will have a program for infrastructure improvements, but will his proposal put a priority on creating good-paying union jobs?

How those questions are answered will depend in important measure on how our side organizes to make its hopes felt in Washington.

In fact, the biggest forces in the Democratic Party's base have completely failed to hold Obama's feet to the fire.

Consider the case of the Employee Free Choice Act (EFCA), proposed legislation that would make it easier for people to join unions. Obama promised labor repeatedly that he'd sign the bill if it got to his desk. Instead, the president looked the other way as business orchestrated a backlash. And the unions, rather than mobilizing to fight for jobs and labor law reform, have been divided among themselves.

It didn't have to turn out this way. The Republic Windows & Doors factory occupation in December 2008 highlighted the potential for labor to take the initiative against big business discredited by the economic crash. Some of the local activism around EFCA showed that labor at the grassroots was ready to mobilize. Instead of relying on this, however, union leaders contented themselves with the illusion of influence, thanks to their renewed access to the White House.

This is the context of the victory of Republican blowhard Scott Brown in the special senate election in Massachusetts. Brown's ability to posture as a populist and make inroads among working-class voters was the direct result of an administration whose chief achievements were a colossal giveaway to the banks and expansion of the war in Afghanistan, while social cutbacks deepen and unemployment rises.

IT SHOULD be emphasized, however, that Brown's victory doesn't mean the clock has been turned back to the Bush years, when the Republicans rode a wave of post-September 11 war hysteria to push through their agenda. The deeply felt sentiment for change that propelled Obama throughout 2008 remains.

The cynics who shrugged off the enthusiasm that Obama generated during the 2008 election were wrong then, and they remain so today. Obama won big not because he had the bankers' seal of approval, but because working people want the change that he seemed to promise.

The growing anger with the Obama administration among precisely those who supported it most enthusiastically can become the basis for rebuilding movements that recognize the importance of relying on grassroots strength. As Deepak Bhargava, executive director of the Center for Community Change, wrote:

Beginning now, and for the long haul, progressives need to recommit to movement building and organizing at scale as the only path to transformative change. The great changes in American history--the abolition of slavery, suffrage for women, the New Deal, civil rights and Great Society--were not the product of electoral shifts alone or insider influence peddling. They were the result of millions of people acting and taking history into their own hands.

Such movements have to be built from the bottom up, and that will mean much patient persuading and organizing. But each step we take sets the stage for future struggles. An important example of what's possible now is the fight to defend public education in California, which building on campuses and in communities across the state toward a day of protests and strikes on March 4.

For the left, the task remains the same as it was a year ago: Build the movements, unions and organizations that represent our agenda, whether or not a Democrat is in office. There are no shortcuts--and the time to act is now.