A budget that only Republicans could love

Lee Sustar and Alan Maass explain how Barack Obama's 2011 budget bows to Republican priorities with a spending freeze that exempts the Pentagon.

BARACK OBAMA'S budget contains a message to everyone concerned about mass unemployment, ramped-up military spending and social service cutbacks: Get used to it.

"We simply cannot continue to spend as if deficits don't have consequences, as if waste doesn't matter, as if the hard-earned tax money of the American people can be treated like Monopoly money," Obama said.

He was channeling the Republican Party's talking points in defense of a budget proposal that would impose a three-year freeze on non-military discretionary spending, while devoting a relative pittance to additional stimulus measures to create jobs.

The budget proposal that the administration submitted to Congress--a broad outline that, once passed, is meant to serve as the guide for appropriations legislation worked out during the year--predicts record federal deficits for next year and a high level of debt for at least the decade to come.

But under the $3.8 trillion proposal, the Pentagon war machine is exempt from the freeze. So military outlays would continue the upward curve begun under George W. Bush to pay not only for endless war in Iraq and Afghanistan, but to maintain the U.S.'s military grip on its worldwide empire. 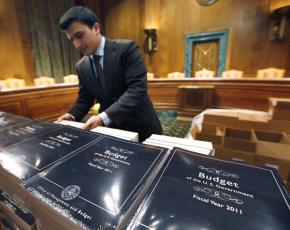 Just in case some Pentagon contractors whose profits have grown fat off the "war on terror" got the wrong message from the talk about the government tightening its belt, Defense Secretary Robert Gates invited top defense company executives to a meeting last week. Gates emphasized "the need for a closer partnership with them and [pledged] to work with the White House to secure steady growth in the Pentagon's budgets over time, according to his spokesman," the Politico reported.

Meanwhile, other discretionary spending will be frozen--which amounts to a cut, given inflation and population growth. A freeze would be negative at any time, but it would be especially devastating in the context of the halting recovery from the worst economic downturn since the 1930s.

For example, although education will fare better than most domestic programs under the proposal, Education Week noted that "school districts are facing a major drop-off in funding when the up to $100 billion in education aid made available under the stimulus package is gone--a prospect known as 'the funding cliff.'"

Moreover, the budget shifts additional education spending into "competitive grant" funding that requires school districts to embrace charter schools and attack teachers' unions. Even the American Federation of Teachers, normally uncritical supporters of Obama, noted: "While there is much to applaud in the budget, we are concerned that virtually all of the proposed increase is for competitive grants, while Title I--the lifeblood for our most disadvantaged children--is flat-funded. Students with the most needs should not have to rely on how well adults compete for dollars."

And by settling for a small jobs creation program, Obama has thrown in the towel on ambitious measures to drive down joblessness. "In essence," economist and New York Times columnist Paul Krugman wrote, "the administration is accepting mass unemployment as just one of those things we have to live with...What we're witnessing is an awesome national failure."

In reality, the freeze on discretionary spending--which excludes Medicare and Social Security--will barely make a dent in the deficit.

Krugman estimated that without the freeze, total public debt would be 78.7 percent of the U.S. gross domestic product by 2020, while the Obama administration estimates that a freeze would reduce that to 77.2 percent--in other words, very little change.

The reason the spending freeze proposal will make so little difference is that it would apply to only a small part of overall government spending. Besides exempting the Pentagon, the budget freeze also excludes big entitlement programs like Social Security, Medicare and Medicaid, not to mention payments on existing debt.

But Obama isn't opposed to putting entitlement programs under the knife. He has embraced longstanding Republican calls for a "bipartisan" commission to consider ways to cut spending on Social Security, Medicare and Medicaid. Republicans favor such commissions because they would allow their members in Congress to avoid the political heat for cutting popular programs. Now, Obama wants to do the same thing.

IT WASN'T so long ago that presidential candidate Obama denounced exactly what he's proposing today. "The problem with a spending freeze is you're using a hatchet where you need a scalpel," Obama said in the first presidential debate with John McCain. "There are some programs that are very important that are under-funded."

Likewise, Democrats last year ridiculed House Minority Leader John Boehner's response to the Obama administration's economic stimulus legislation. "It's time for government to tighten their belts and show the American people that we 'get' it," Boehner said.

So what did Obama have to say in this year's State of the Union address? "[F]amilies across the country are tightening their belts and making tough decisions. The federal government should do the same."

You don't need to be a radical to see the absurdity of this pronouncement. Given the collapse in business investment and the drop in consumer spending because of unemployment and the housing crash, government spending is providing a large part of whatever energy the halting U.S. economy has. That's why there have been a series of economic stimulus packages coming out of Washington--not only from Obama, but even George W. Bush in his last years.

Now, though, Obama, ever subservient to the Pentagon and Wall Street, has concluded that once the bankers and generals have taken their cut, there's nothing but crumbs left for the rest of us.

Of course, the national debt and the federal budget deficit aren't irrelevant. They could undermine the U.S. economy in the long term by forcing the government to pay higher interest rates to finance spending, and lead investors to ditch the U.S. dollar.

But the alarmists who insist on spending cuts now, while the U.S. economy is still staggering, are prepared to sacrifice millions of people's livelihoods through mass unemployment in order to please the bond market.

Meanwhile, in all the talk about the deficit, neither Republicans nor the Obama White House will discuss the measures that could have a real effect on it--raising taxes on the rich and derailing the Pentagon gravy train.

One of the two chief reasons for the ballooning federal deficit during the 2000s was George Bush's $1.3 trillion in tax cuts that went overwhelmingly to the already obscenely wealthy. Obama plans to allow these tax breaks to expire next year, as they were supposed to under existing legislation. But what's really needed is to raise taxes on the rich--to get back the billions they made off the tax cuts for the last 10 years.

The other chief reason for the deficit is military spending, whether in the form of the Pentagon budget, the hundreds of billions for U.S. wars and occupations, or the construction of the national security state. But Obama has exempted every part of this spending from the freeze.

The Obama budget underscores the steady rightward shift of his administration. The president has made his priorities clear. Those who want a different agenda are going to have to fight for it.