The conventional wisdom that Americans are turning right in reaction to the radical excesses of the Obama administration has it backwards.

IT DIDN'T take long after Republican Scott Brown won Ted Kennedy's vacant Senate seat in Massachusetts before the political commentators were declaring the cause of the Democrats' humiliating defeat: The Obama administration had gone too far to the left in its first year, alienating America's alleged "center-right" majority.

"A lot of people are saying...the only solution" for Obama is to "find some more common-ground reforms in the middle," claimed Fox & Friends co-host Gretchen Carlson. CNN senior political analyst David Gergen warned on Larry King Live: "This is not the time to go out and crusade for liberal causes."

It wasn't only Republicans making such pronouncements. "The only way we are able to govern successfully in this country is by liberals and progressives making common cause with independents and moderates," Democratic Sen. Evan Bayh told ABC News' Jonathan Karl. "Whenever you have just the furthest-left elements of the Democratic Party attempting to impose their will on the rest of the country, that's not going to work too well." 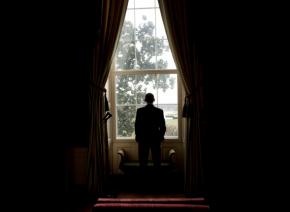 Millions of people are angry with the Democrats--not because they've gone "too far to the left," but because they have failed to deliver on any of the issues where working people expected to see progress, with jobs and health care at the top of the list.

If there's growing anger with the government's economic policies, it's because the Democrats have taken over management of the multi-trillion-dollar bailout of Wall Street, while offering no help at all for ordinary people hammered by the recession. The discontent with legislation to reform the health care system is the result of the Obama administration refusing to stand up for popular proposals that would have curbed the profits and power of health care companies.

Instead of taking a stand for what the people who voted for them want, the Democrats have made one concession after another--confirming the old image of politicians who will say one thing to win votes and do another in office.

And it's only going to get worse. The Obama administration is promising that it will regain momentum on the issue of health care by...giving up even more to the Republicans in the spirit of "bipartisanship." Asked if he was willing to start from square one, Obama told CBS's Katie Couric that he wants to sit down with members of both parties and "look at the Republican ideas that are out there."

That's code for things like "tort reform"--limiting the awards that victims of malpractice can get in court settlements (a major Republican talking point). So don't be surprised if whatever health care legislation finally makes it to a vote includes even more concessions to the industry than what's already there.

WHY ARE the Democrats--thrown on the defensive by Scott Brown's victory in Massachusetts despite the fact that they still have an 18-seat majority in the Senate, bigger than any party has had in at least a generation--so timid?

As blogger Markos Moulitsas noted in an article for The Hill, "After decades of hearing pundits make the claim, Democrats inside the Beltway seem to have internalized the fiction that they are a minority in a conservative country. There is no other way to explain their lack of faith in their own policies and their inability to fight for strong progressive legislation, even after voters gave them an unambiguous mandate to govern."

Moulitsas is only half right. Democrats do act like they're "a minority in a conservative country," but it's not because of a "lack of faith"--it's because they are beholden to the same corporate interests as the Republicans. The explanation for "their inability to fight for strong progressive legislation" is that the Democrats are committed to the status quo, and aren't about to enact such legislation unless they face pressure to do so.

However, the increasing discontent with the Democrats doesn't mean a majority of Americans are clamoring for a return to the "good old days" of Republican rule.

For one thing, the Republicans' approval ratings are even lower than those of Democrats. A recent Wall Street Journal/NBC News survey found that 52 percent of voters have a favorable view of Obama, just 38 percent have a favorable view of the Democratic Party--and fewer than one in three voters view the Republicans favorably. In a Washington Post/ABC News poll, just 24 percent of people said they trusted congressional Republicans "to make the right decisions for the country's future." (Congressional Democrats didn't do much better--only 32 percent trust them.)

Republicans like Sarah Palin are taking advantage of the disillusionment with Obama to pose as "populist" torchbearers--as she did at the recent "National Tea Party Convention," where she attacked Wall Street.

But the populist "mask" doesn't change what the Republicans actually stand for--or the mountains of cash they take from Wall Street and corporate interests. Witness Republican National Committee Chair Michael Steele's recent comment that "after taxes, a million dollars is not a lot of money." Steele was speaking in Arkansas, where the median annual household income is $38,820.

The core policies that the Republicans stand for--devotion to the interests of big business, support for imperial dominance and social conservatism--haven't suddenly been enthusiastically embraced by the majority of the population.

If the GOP can get away with posing as populists, it's precisely because the Obama administration has given them the opportunity--by failing to push for a jobs program or making Wall Street pay for the crisis it caused, by delaying action on advancing LGBT rights, and by failing to end the occupations of Iraq and Afghanistan, among other things.

THE FACT that the Obama administration has catered to Corporate America doesn't mean that big business won't squeeze the White House for even more concessions. That's the meaning of the carefully placed "news" articles recently about "buyer's remorse" in the corporate boardrooms when it comes to the Democrats. As the New York Times reported:

[I]ndustry executives and lobbyists are warning Democrats that if Mr. Obama keeps attacking Wall Street "fat cats," they may fight back by withholding their cash. "If the president doesn't become a little more balanced and centrist in his approach, then he will likely lose that support," said Kelly S. King, the chairman and chief executive of BB&T...

"I understand the public outcry," [King] continued. "We have a 17 percent real unemployment rate, people are hurting, and they want to see punishment. But the political rhetoric just incites more animosity and gets people riled up."

The idea that the Wall Street bankers might transfer their support to Republicans because the Obama administration has been too hard on them will seem like a sick joke to all the people angry with the lack of action from the White House.

Millions of people looked to Barack Obama's election with a sense of hope that change would finally come to U.S. politics. Their disappointment after the administration's first year is further evidence of the famous words of Frederick Douglass: "If there is no struggle, there is no progress."

Unless it faces pressure from the millions of people want to see the status quo change, the Obama administration will cater to the relentless pressure it faces from above.

The question is when and in what form that pressure from below will emerge. All the ingredients for anger to turn to action are in place. The latest evidence of the desire for a left-wing alternative to the status quo: A recent Gallup poll found that more than a third of people said that they had a positive image of "socialism"--including 53 percent of Democrats surveyed.

The task today for anyone who wants to make that alternative a reality is the patient work of organizing the political discussions, small struggles and growing movements that can lay the basis for bigger ones to come.