PRESIDENT BARACK Obama announced on February 17 that his Energy Department had approved an $8.3 billion loan for the construction of two nuclear reactors in Georgia, opening the way for the first nuclear power plants to be built in the U.S. in three decades.

Obama couched the announcement in environmental rhetoric, counting nukes on a list of "clean" energy sources, alongside solar and wind power.

Maybe he should ask the Pennsylvania residents who lived near the Three Mile Island plant 31 years ago if they think nuclear power is "clean." In 1979, an accident at the Three Mile Island reactor nearly ended in a catastrophic meltdown. Or he could talk to the 6 million Ukrainians--those who are still alive--who were exposed to contamination in 1986 when the Chernobyl rector released a radioactive cloud to drift over parts of Europe.

"The Russian roulette-playing nuclear industry claims a class-nine meltdown will never happen," wrote consumer advocate Ralph Nader. "That none of the thousands of rail cars, trucks and barges with radioactive wastes will ever have a catastrophic accident. That terrorists will forgo striking a nuclear plant or hijacking deadly materials, and go for far less consequential disasters." 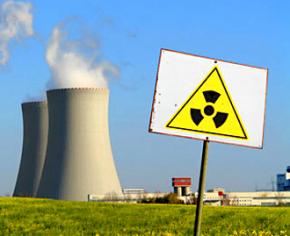 As the Progressive's Matthew Rothschild wrote in his blog, "It is a slap in the face to environmentalists...Though these will be the first nuclear reactors constructed in more than three decades, Obama still labeled them, somehow, as part of the 'technologies of tomorrow.'"

Nevertheless, the Obama administration's turn to nukes is fine with the liberal New York Times. In an editorial titled "A Reasonable Bet on Nuclear Power," the Times worried that the multibillion-dollar loans might never be paid back, but ultimately decided that "the risks are worth taking to get the U.S. back into the game, for the sake of the climate, this country's energy future and the jobs a vibrant nuclear technology industry could create."

PEOPLE'S JUSTIFIED worries about climate change are being used as a cover to push nuclear power--which is being painted as "clean energy," in comparison with coal.

But that requires a pretty loose definition of "clean." When you take into account the production cycle as a whole--the mining and milling of uranium, conversion, enrichment, fuel fabrication and disposal of radioactive waste, nuclear power is by no means cleaner for the environment.

After decades of debate, the nuclear industry has still not solved the problem of what to do with nuclear waste. In 1987, Congress chose Yucca Mountain in Nevada as a waste repository. Since that time, Yucca was found to be unsuitable--considering that it's a volcanic mountain made of permeable pumice stone transected by 32 earthquake faults.

France, which is often touted as a nuclear success story, hasn't solved the problem either. And a recent radioactive leak forced the French government to close two rivers.

The Vermont Yankee nuclear plant on the Connecticut River near the Massachusetts border, has reported leaks of tritium--a radioactive form of hydrogen that is colorless, odorless and tasteless. And Yankee, where reports of leaks have sparked protests demanding that the facility be closed, isn't alone. The Nuclear Regulatory Commission says that at least 27 of America's 104 licensed reactors are now leaking radioactive tritium.

"Georgia has been targeted largely because its regulators have demanded ratepayers put up the cash for the reactors as they're being built," explained anti-nukes activist and writer Harvey Wasserman. "Florida and Georgia are among a small handful of states taxing electric consumers for projects that cannot come on line for many years, and that may never deliver a single electron of electricity."

In its 2005 Energy Policy Act, the Bush administration included loan guarantees of $18.5 billion for nuclear power. The money for the Georgia reactors is the first loan to be awarded. But Obama is trying to outdo the Bush administration--in his State of the Union address, he announced a proposal to triple the amount promised for loans for the construction of new reactors.

The nuclear industry sees this as just the beginning. "We will get on with that at a more rapid pace now that we've made this first step," said David Ratcliffe, chair and chief executive of Southern Company, which will get the new reactors.

The Obama administration claims that by finding common ground with pro-nuclear Republicans, it will get some Republican support for other aspects of the administration's energy plan, such as caps on carbon emissions.

But Republicans are already thumbing their noses at Obama's nuclear olive branch. Robert Dillon, a spokesperson for Sen. Lisa Murkowski (R-Alaska), said that she thought nuclear power was "a core component of a comprehensive energy plan," but that didn't mean she would vote for the energy bill.

Appeasing Republicans isn't the Obama administration's only reason for backing nuclear power. If the nuclear power industry has a seat at the Energy Department table, it's because they paid for it.

As Wasserman said in an interview on Democracy Now!

[Obama has] certainly come through for his backers at Exelon there. And it's a tragedy for him and for the administration, but most importantly, for the American people. We're seeing the corporate interests flooding through this administration, getting pretty much what they want...

It really boggles the mind to see this administration going down this path. But we will resist, and we will fight them.