The terrible truth about the “good war”

Nicole Colson explains why the classified Pentagon documents on Afghanistan released by WikiLeaks present a damning portrait of who is suffering from the U.S. war.

THE RELEASE of more than 92,000 classified documents relating to the war in Afghanistan by the muckraking Web site WikiLeaks has left the Obama administration and its war partners trying to defend the indefensible.

Along with making the documents available on the Internet on July 25, WikiLeaks took the further step of providing the archive of material to the New York Times, Britain's Guardian and the German magazine Der Spiegel several weeks prior to the wider release--so these media outlets were ready with in-depth articles about what the documents revealed.

The Obama White House was quick to denounce the WikiLeaks release. At first, it claimed that the documents didn't reflect the reality of the war, since they only run through last December--before the implementation of Obama's "surge" plan announced late last year.

When it was clear that no one bought that one, administration officials turned to criticizing the release for putting "national security" in jeopardy--while also claiming that the documents were "old news" and didn't really reveal anything that wasn't previously known (leading to the question of why the documents were classified in the first place.) 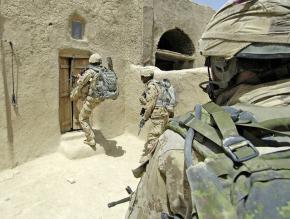 This last point was surely damage control--the WikiLeaks documents vividly expose the disastrous state of the U.S. war on Afghanistan.

They provide indisputable proof that the Taliban insurgency is stronger than at any point since 2001, and they reveal the scope of U.S. war crimes committed against the civilian population of Afghanistan--one of the key factors driving resistance to the U.S.--and how those war crimes have been systematically downplayed by the U.S. military.

One incident highlighted by the Guardian provides a graphic illustration of how damaging the WikiLeaks documents are.

In 2007, near the city of Jalalabad, a convoy of U.S. Marines was struck by a minivan rigged with explosives. As they raced the six miles back to their base, the Marines opened fire with automatic weapons, spraying bullets at anything in their path, including "teenage girls in fields, motorists in their cars, old men as they walked along the road," the Guardian described. "Nineteen unarmed civilians were killed and 50 wounded" in what the paper called a "bloodbath."

But the WikiLeaks documents show that an initial military account didn't state that unarmed civilians were killed. Instead, the report "simply says that, simultaneous to the suicide explosion, 'the patrol received small arms fire from three directions,'" the Guardian wrote. The six-mile rampage back to the base--which the Guardian notes was later the subject of a 17-day military inquiry and 12,000-page report--was at first described as simply, "The patrol returned to JAF [Jalalabad air field]."

The documents also illustrate how the massacre and initial cover-up sparked public fury among Afghan civilians at their American occupiers in the following hours and days. The Guardian wrote:

The logs report that nine hours after the shooting, the governor of Nangarhar province appealed to the Marines to stay at home. "He did not want more CF [coalition forces] in the area due to public hostility." At about the same time, the Americans stopped issuing internal reports. "Event closed at 1349Z," it read. But that was not the end of the affair.

Demonstrations ran through the streets of Jalalabad over the following days, the logs report, in which protesters broke windows and blocked roads.

A month later, in April 2007, the Afghan Human Rights Commission published a report into the shooting which said the victims included a 16-year-old newlywed girl carrying a bundle of grass and a 75-year-old man walking back from the shops. The report said the Marines may have come under fire from one source straight after the suicide bomb, but challenged the assertion they suffered a "complex ambush from several directions."

By then, a U.S. Army colonel had admitted to the Afghans that the shootings were a "terrible, terrible mistake" and "a stain on our honor." He paid $2,000 to the families of each victim.

Yet all of the Marines involved in the incident were later exonerated by the military of any wrongdoing.

The massacre near Jalalabad is only one war crime among many revealed in WikiLeaks' 92,000 pages of documents. According to the Guardian, the documents show at least 144 separate instances of the killing of innocent Afghan civilians--ranging from individual shootings at the hands of CIA paramilitaries to massive, mistaken air strikes that wiped out entire families and villages at a stroke.

UNSURPRISINGLY, THE media response to the documents varied. The New York Times, for example, seemed initially to focus less on U.S. massacres or the impact of the war on Afghan civilians than on what the documents showed about the role of Pakistani intelligence in propping up the Taliban and other forces fighting the U.S.

The Times wrote a lengthy note to readers justifying its coverage and explaining that it had "taken care not to publish information that would harm national security interests."

The question, of course, is whose interests would be harmed? Ordinary Americans, who have been funding the war to the tune of tens of billions of dollars each year? The Afghan people, who have suffered even worse treatment at the hands of the U.S. military than was previously thought, according to the documents? What about U.S. soldiers, who are fighting and dying in growing numbers in Afghanistan?

Just days after the release of the WikiLeaks material, a separate Times article--headlined "Afghans and NATO differ on civilian deaths"--again highlighted the disparity between what military officials claim about the war and what Afghan civilians experience.

In the story, U.S. officials disputed Afghan claims that 52 civilians were killed in a rocket attack in the southern Helmand province on July 23. High up in the article, the Times noted that "the American-led military command in Kabul said that an investigation it was conducting with Afghan officials 'has thus far revealed no evidence of civilians injured or killed.'"

The investigators must not have talked to Mohammed Usman, who is quoted by the Times in the same article as saying he helped pull the bodies of 17 children and seven women from the rubble. "They have ruined us, and they have killed small children and innocent women," he said. "God will never forgive them."

Atrocities like this should at least prove that the massacres revealed in the WikiLeaks documents aren't in the past.

In fact, the vast bulk of the information released by WikiLeaks seems to have been made classified by the Pentagon not because of any real threat to "national security," but because of the damage such a cumulative archive of material about the war would have on public opinion on whether the U.S. and its allies should still be in Afghanistan. As James Fallows of the Atlantic noted:

[I]nformation that may be old news to insiders may seem a revelation to the broader public. Whether from George W. Bush or Barack Obama, presidential speeches about Afghanistan have not emphasized the mixed loyalties of the Pakistani security services, the frustrations of dealing with tribal leaders and corrupt officials, the extent of civilian casualties, and other items that, according to insiders, "everyone" already knows.

The Pentagon Papers further discredited the U.S. war machine by showing not only the true extent of the war and civilian casualties, but the way that successive administrations--both Democratic and Republican--had deliberately misled the American public about the war. As Fallows continued:

By 1971, anyone who had been really following the Vietnam War already "knew," or could guess, much of what was in the Pentagon Papers. The Papers mattered because of (a) the confirmation that the government had known about the problems for a very long time, and (b) the spreading of that understanding to the broader public.

If the WikiLeaks documents, coming during what is already the deadliest month ever for U.S. troops in Afghanistan, really do mark a shift in mainstream opinion about the war, it will be because everyone [general public, press and politicians] will now recognize what "everyone" [insiders] already knew.

It's too soon to judge the impact of the WikiLeaks documents, especially with thousands more reportedly to be released soon. But it is certain that this new window into a failing war comes as the percentage of Americans who support it has reached an all-time low.

According to an ABC News/Washington Post poll conducted in mid-July, the number of Americans who say the war in Afghanistan has been worth fighting has declined from 52 percent in December to 43 percent now. Obama's approval rating for handling the war, which was 56 percent in April, is now down to 45 percent.

Nevertheless, the Obama administration won't end the U.S. war on Afghanistan because of declining approval ratings or because it is embarrassed by the revelations in the WikiLeaks documents. On the contrary, a few days after the WikiLeaks release, the House approved a $33 billion war-funding increase to pay for Obama's latest troop surge--and the Obama administration, along with military leaders, reiterated its commitment to staying in Afghanistan "until the job is done."

As the WikiLeaks documents show, that will mean more massacres and bloodshed for ordinary Afghans.