Recent cuts in state Medicaid coverage will mean a literal death sentence for some Arizonans. Elizabeth Schulte explains how this nightmare came about.

OCTOBER 1 should have been a great day for Mark Price, a father of six children who was battling leukemia. That day, his doctor found donor matches for the bone marrow transplant that Price needed to stay alive.

But October 1 was the also the day that the state of Arizona changed its rules for transplant coverage under the state Medicaid program. Without the coverage, Price could no longer afford the operation.

An anonymous donor came forward and offered the money to cover the procedure. But it was too late. Mark Price died before he could get the operation.

For low-wage workers and their families, who will now have to go without these procedures, this is nothing less than "death by budget cut," as the New York Times' Marc Lacy put it. 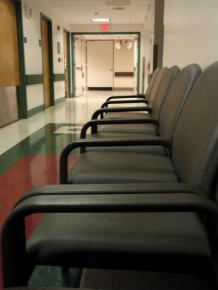 "The most difficult discussions are those that involve patients who had been on the donor list for a year or more and now we have to tell them they're not on the list anymore," Dr. Rainer Gruessner, a transplant specialist at the University of Arizona College of Medicine, told the Times. About 100 people have been cut from the list, and now can't afford to get their transplants.

Francisco Felix, who has hepatitis C, believed that the operation he needed was within arm's reach when a dying family friend said that she wanted to donate her liver to him. When state funding for his operation was cut, his family tried to raise the $200,000 they needed in time for the operation, but couldn't. The liver went to someone else on the transplant list.

"I know times are tight and cuts are needed, but you can't cut human lives," said Felix's wife, Flor. "You just can't do that."

Patients and their families have stepped forward, turning out for a press conference to ask legislators to call a special session to reinstate transplant funding. But Arizona's Republican Gov. Jan Brewer has responded with nothing but contempt.

"Bottom line is that the state only has so much money, and we can only provide so many optional kinds of care, and those are one of the options that we had to take," the governor said--after offering her condolences to Mark Price's family.

It's interesting what Brewer considers "optional" spending. According to a press release from her office in 2009, the state could spare $20 million--including $1.7 million in federal stimulus funding--to renovate the Veterans Memorial Coliseum in Phoenix.

As Randy Sheperd, who needs a heart transplant, told reporters, "It's not an option for us; it's a necessity.

But if Brewer isn't listening, just about everyone else is. According to the Arizona Republic, patients registered in the National Transplant Assistance Fund have seen a surge of donations since the news coverage of the story. As of December 4, Francisco Felix had raised $74,124, and heart transplant patient Randy Shepherd had raised $52,720.

But both need hundreds of thousands more.

IN THE name of balancing the state budget, Arizona lawmakers claim that these kinds of deep and dangerous cuts are unavoidable.

But even if you accept their heartless logic, the cutbacks related to transplants for state Medicaid patients won't come close to filling the budget gap. Jennifer Carusetta, the legislative liaison for Arizona's Medicaid agency, told the New York Times that the transplant cuts would save a mere $800,000 in the current fiscal year, and only $1.4 million for a full year. And this is supposed to close Arizona's $2.6 billion shortfall?

This year, state lawmakers decided to put a stop to the Children's Health Insurance Program, which covers 47,000 children of working-class families. They had to backtrack though, when they found out it might keep Arizona from being eligible for federal funds.

Jan Brewer--the same person who came to national prominence for her anti-immigrant scapegoating with the racial profiling law SB 1070--is also leading the way in mean-spirited cuts. But other states are eager to follow Arizona's example.

According to a September Kaiser Family Foundation report, 39 states cut provider payments and 20 cut optional benefits in their 2010 fiscal years, with similar numbers planning to do so in 2011. And the cuts will have a long-term effect on patients, because when state governments cut payments, some providers choose to opt out, leaving patients who use Medicaid to be refused by more health care providers down the line.

"Medicaid's killing all of our state budgets," Gov.-elect Rick Scott told a conservative blog during a recent Republican Party meeting in his home state of Florida--a state that recently tried to cut costs with a pilot program that requires Medicaid patients in some counties to enroll in managed-care organizations, or HMOs. The theory is that competition for profits will make the HMOs perform better, and at lower costs.

But that hasn't been the experience for Leslie Rosenstock and her 34-year-old son Jason, whose rare brain tumor left him with several physical problems, including being paralyzed and legally blind. Since they moved to Florida two years ago, the state has rotated Jason through three HMOs and made her life a nightmare of paperwork, duplicative blood tests, and repeated denials of the medication Jason needs to live.

So in the name of cutting bloated government bureaucracy, the state of Florida has introduced a bloated private-sector bureaucracy--and sick people are forced to pay the price.

This is the backwards, upside-down and inside-out logic of state governments putting the priority on balancing their budgets during the worst recession in decades.

In Idaho, the demand for food stamps is going up, but the state close nearly a third of the field offices of the state's Department of Health and Welfare, the place where people go to apply for food stamps. And the state cuts are flowing down to the local level, where municipal governments are cutting such "luxury" items as fire stations.

According to the Economic Policy Institute, the percentage of people who had employer-subsidized health insurance dropped three percentage points between 2008 and 2009, falling to 59 percent. Yet the state of Arizona feels like this is the perfect time to cut government health care subsidies.

In a sense, states like Arizona are mimicking the model that's kept the private sector profitable, even during the Great Recession--force workers and their families to make do with less. Only when it comes to someone like Mark Price, desperately in need of a bone marrow transplant, making do with less means a needless death.