What’s at stake in Greece?

The PASOK government of Prime Minister George Papandreou is facing a confidence vote in Greece's parliament today, as the mass movement opposed to austerity measures prepares for new battles.

In spite of a massive bailout by European governments and the International Monetary Fund--which came with demands for austerity that caused immense hardship for workers--Greece is still teetering on the edge of default. And now the loan sharks are demanding even deeper cuts in return for further financial help.

Antonis Davanellos, a journalist, unionist and leading member of Internationalist Workers Left (DEA), explained the background to the crisis in Greece, and how a determined resistance has arisen to challenge the government's austerity agenda.

ON WEDNESDAY, June 15, for roughly seven hours, there was no government in Greece.

In the streets, hundreds of thousands of people were demonstrating in response to a call by the "movement of the squares"--the Greek version of "Indignados" of Spain who have occupied public squares in opposition to austerity. At the same time, the unions were carrying out a 24-hour general strike in the private and public sector.

The coming together of the "Indignados" (the "indignants" in English, "aganaktismenoi" in Greek) and the labor movement in the streets of every major city in Greece was the most dangerous moment yet for the government, and, in fact, for the whole ruling establishment.

Meanwhile, Prime Minister George Papandreou of the social-democratic PASOK party, was talking with Antonis Samaras, leader of the right-wing party New Democracy, to propose a government of "national salvation," with ministers and even the prime minister accepted by both. PASOK has a majority on its own of 154 members of parliament out of 300, but Papandreou will face a confidence vote on June 22. 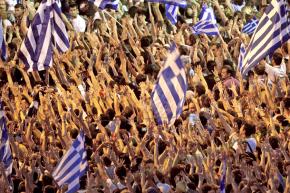 It went on for hours, this meeting between the two main bourgeois parties that have held power since the end of military rule in 1975--with the question of who should assume government power.

But they were forgetting one small detail: This government of "common acceptance" wasn't an elected government.

Finally, after an internal revolt within PASOK's parliamentary group--of MPs who refused to deliver power to the right and the capitalist technocrats, out of fear of the reaction of the already outraged masses of people--the plan was canceled. Papandreou was forced to declare he would continue as prime minister and carry on with the effort to "save" the country.

AT THE heart of these developments is the determined resistance of the people on the one hand--and on the other, the complete failure of the economic program of the government and its bailout agreement with the European Union (EU), European Central Bank (ECB) and International Monetary Fund (IMF).

This agreement--the so-called "Memorandum" from last year--included a massive loan to Greece worth 110 billion euros, but with the condition of an unprecedented program of austerity. This bailout, supposedly, was going to allow the government to survive the immediate period, and resume normal financing by international markets in 2012.

This proved to be completely out of touch with reality. Just in this current year, the Greek state will pay its lenders in interest alone the equivalent of 30 percent of all its revenues--or 8 percent of the country's gross domestic product. By 2015, the equivalent figures will be 39 percent of government revenues and 10 percent of GDP.

At the same time, Greece's debt, instead of going down, will increase. According to even pessimistic estimates, the sacrifices forced on the people by the Memorandum were supposed to bring debt down to 350 billion euros by 2015, or 139 percent of annual GDP. Today, the government, EU and IMF all admit that Greece's debt will exceed 500 billion euros, or almost 200 percent of GDP!

The loans are not decreasing the debt, but on the contrary are increasing it. The country is hostage to a colossal usury, and the sacrifices of the people are being transferred in full as profits into the vaults of local and international usurers.

Greek capitalists are proposing to the lenders a smoother "restructuring" of the debt, with a longer repayment period and different interest rates. This policy guarantees to the lenders a longer-term milking of the people. It most likely will be approved by the EU and IMF, since it fits with the general discussion in dealing with the debt in larger European economies like Spain, Italy and others.

At the same time the local bourgeoisie is taking advantage of the "emergency situation" to impose measures that have nothing to do with public finances, but with capitalist competition. It is attempting to overturn the balance with the labor movement in favor of capitalist interests.

This direction is reflected in a revised agreement with the lenders. The Greek government has committed itself for the next five years to a policy with the following features: further immense reductions in wages and pensions in the public sector; big cuts in private-sector wages; merciless reductions in social spending; unrestricted flexibility in labor relations; and an increased sales tax on consumption items and tax cuts for capital.

The other main feature is a sweeping wave of privatizations in energy, water, telecommunications, ports, airports and virtually anything publicly owned. There is nothing similar to it in the history of Greek capitalism.

The Greek ruling class is united with its international allies and lenders behind this program. But it hasn't yet been able to answer the question of whether the government will be able to impose it on the working class and the people.

The collapse of the PASOK government isn't just a perception. Every day, thousands of people who voted PASOK turn out against leading members of their party when they dare to appear in public, while large trade union organizations officially declare their break with PASOK.

The policy of PASOK governing together with the right has failed for now, but it will be put forward again, under greater pressure. At the same time, in the press, including the center-left variety, more and more articles are appearing asking the government to turn to even more authoritarian policies to impose the austerity measures of the Memorandum.

AGAINST THEM, the resistance has hardened--in its forms of struggle, its demands and its ideas.

The movement in the squares is an important factor, which has further isolated the bourgeois parties from any popular support. The labor movement is taking a step forward from 24-hour general strikes into more prolonged struggles--for example, the workers of publicly owned electric utility have taken indefinite action in the form of rolling 48-hour strikes to protest the privatization of the company. On June 27 and 28, the two country's main union federations, GSEE for the private sector and ADEDY for the public sector, are calling a 48-hour general strike--the first time this has happened in 30 years.

In the public assemblies on the squares and in workplaces, the debt and how to deal with it has become the main question. The revolutionary socialists propose cancellation of the debt, but among the mass of people, a majority favor resisting the debt agreements. Illusions in the nature of EU and the euro have been dealt a blow--the idea of "no sacrifice for the Euro" is also a majority opinion.

All this means big responsibilities for the left. The good news is that for the first time in many years, the Greek Communist Party (KKE, by its initials in Greek) has started to open up to a policy of common action with other left forces. This policy is already accepted by the Coalition of the Radical Left (SYRIZA) and the smaller coalition of the far left ANTARSYA.

DEA, through its participation in SYRIZA, supports a united front of the left involving the KKE, SYRIZA and ANTARSYA, starting from daily struggles and extending to a common intervention in the next elections, which could take place in the immediate future and which will be of great significance.

The struggle against the Memorandum and the agreement of government and the EU, ECB and IMF is a matter of life and death for the system--and for the Greek working class and the people of this country. As we carry on this battle, we also look with anticipation for the good news from the movements in Portugal, Ireland, Italy and Spain--the other European countries experiencing the sharpest crises, and known together with Greece by the acronym PIIGS.

Now, the PIIGS are fighting back.