Claiming the Republican agenda as his own

By proposing cuts in programs like Social Security, Obama is emboldening the right.

TURNS OUT the president many expected to revive the New Deal is out to bury it instead.

That's the inescapable conclusion following President Barack Obama's offer to trade cuts in the Social Security and Medicare programs--part of a projected $4 trillion in reductions over 10 years--in exchange for Republican votes to raise the U.S. debt ceiling by August 2.

In return for giving the Obama administration the authority to keep borrowing to finance government operations, Republicans were expected to bow to modest tax increases that will annoy the superrich and outrage Tea Party ideologues in the short term--but would actually lock in tax rates for the wealthy at historic lows over the long term.

The deal fizzled when House Republicans balked at any tax increase--or even just closing loopholes.

Now Senate Minority Leader Mitch McConnell has proposed a complicated "Plan B," which involves giving Obama the authority to raise the debt ceiling with a minority of votes in Congress in three separate installments, as long as he proposes spending cuts to offset the increase. 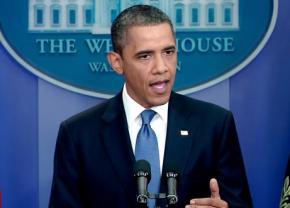 McConnell said he made the proposal to calm financial markets alarmed by the prospect of a U.S. government default on its debt. But since spending cuts wouldn't be mandatory under the McConnell plan, it isn't clear if House Republicans will go along with the deal.

Given the pressure from Wall Street and big business to avoid a potentially catastrophic default, the McConnell proposal may go through. This would move the budget fight to a series of debates over appropriations bills in Congress over the rest of the year.

But by offering a "grand bargain" to Republicans, Obama has already done incalculable political damage. He has legitimized the idea of cuts to Social Security and Medicare--big cuts. After decades of being the "third rail of American politics," as the cliché went, Social Security is now slated for the chopping block, thanks to a liberal Democratic president.

THE SIZE of the cuts Obama was willing to give up to Republicans as part of the debt-ceiling negotiations is staggering.

According to Ezra Klein of the Washington Post, Obama's offer included a two-year increase in the eligibility age for the Medicare health program for the elderly; a change in the calculation of inflation that would slash $200 billion from Social Security benefits; and a tax scheme that would raise $800 billion in additional revenues, but in return would preempt the Bush tax cuts for the super-rich from expiring--which would mean settling for just half the amount that would be collected if the Bush tax cuts were simply allowed to end.

According to Klein, "[W]hen you add the effect of making the Bush tax cuts a permanent part of the code, [the Obama proposal] would net out to a tax cut of more than $3 trillion when compared to current law." Liberals aghast at Obama's proposals should, Klein suggested, "be sending Eric Cantor a fruit basket" to thank the Republican House Majority leader for helping to sink the deal.

Many liberals are furious at the latest in Obama's serial surrenders to the right--like economist James Galbraith, who was incredulous at the rightward turn "from a president who claims to be a member of the Democratic Party."

But Obama still has his apologists. They claim the president's offer to cut Social Security and Medicare was a political masterstroke that exposed Republicans as right-wing ideologues who won't tolerate the slightest tax increase on the wealthy, even when the president hands them an ax to cut the programs they've been out to destroy for decades.

To be sure, by rejecting Obama, the Republicans have been exposed again--if any further exposing was needed--as pathologically opposed not just to any tax increase on the wealthy, but to merely closing loopholes exploited by Corporate America or the rich.

But to concentrate on the Republicans' behavior is to willfully ignore how far Obama went in embracing virtually everything the Republicans once demanded in the name of reducing the federal deficit.

Obama's actions can't be explained as bad or incompetent tactics. He and his administration hope to win the favor of the bankers, CEOs and moneyed interests who fund politicians of both parties--in short, to keep capital happy.

Liberals may be in denial about this, but conservative New York Times columnist Ross Douthat grasped the dynamic in Washington today:

Barack Obama wants a right-leaning deficit deal. For months, liberals have expressed frustration with the president's deficit strategy. The White House made no effort to tie a debt ceiling vote to the extension of the Bush tax cuts last December. It pre-emptively conceded that any increase in the ceiling should be accompanied by spending cuts. And every time Republicans dug in their heels, the administration gave ground.

The not-so-secret secret is that the White House has given ground on purpose. Just as Republicans want to use the debt ceiling to make the president live with bigger spending cuts than he would otherwise support, Obama's political team wants to use the leverage provided by those cra-a-a-zy Tea Partiers to make Democrats live with bigger spending cuts than they normally would support.

So in spite of an agonizing jobs crisis and an economy that remains weak more than two years after the official end of the Great Recession, the president's top priority is cutting the federal deficit--and by huge spending reductions, not raising new revenues by taxing the rich.

After agreeing in December to extend all the Bush tax cuts, including for the rich, Obama moved toward Republican positions on the debt and the deficit. He delivered in April with an agreement for $37 billion in cuts affecting mainly the poor, in the single-biggest, one-year budget reduction in U.S. history

Putting Social Security and Medicare on the chopping block was only the next logical step.

SO HOW did a candidate who evoked the labor struggles of the 1930s and the 1960s civil rights movement become a president who aids and abets the right-wing effort to gut what remains of the U.S. welfare state?

It's important to remember that Obama, while telling Democratic primary voters what they wanted to hear on the 2008 campaign trail, was also the candidate of a section of finance capital, outdoing Republican rival John McCain in donations from Wall Street.

Early in his term in office, Obama met with top bankers to tell them, "My administration is the only thing between you and the pitchforks." He protected them well, however, continuing the $700 billion rescue of Wall Street begun under Bush and working with Federal Reserve Chair Ben Bernanke to open the spigots of the U.S. central bank for even bigger backdoor bailout. All told, the U.S. government has loaned, invested or guaranteed some $13 trillion to business--a figure almost equal to the total annual economic output of the U.S.

And how did Corporate America repay Obama? By funding the right-wing Tea Party movement to put even greater pressure on the White House to carry out austerity.

The mainstream media hyped the emergence of the Tea Party as a conservative grassroots revolt against Obama's health care reform plan. In reality, Obama's health care law was tailored to the needs of insurance companies and giant pharmaceutical corporations. As a result, Obama failed to energize the Democratic base that was hoping for a direct and immediate extension of health care benefits.

With the right wing whipped up and Democrats demoralized, the Republicans were able to win 63 seats in the House in last November's election. The media ignored the fact that the reason for the Republican win was a sharp falloff in Democratic voters from 2008, instead declaring that conservatives had a mandate to roll back the Obama agenda.

But the Obama agenda was never the liberal crusade that many expected and hoped for. The administration's $787 billion stimulus package was too small and too tilted towards tax cuts to decisively lower unemployment rates. The jobs crisis drags on with no end in sight, more than a year after Treasury Secretary Timothy Geithner wrote an op-ed article headlined, "Welcome to the recovery." The mortgage relief program, intended to help homeowners in danger of foreclosure, is a bureaucratic nightmare that has helped only a fraction of those who needd it.

Now, with his re-election campaign getting underway, Obama is lurching even further right. Like many Democrats before him, he has concluded he can take the Democratic base for granted in 2012. So Obama is angling to outflank Republicans as the politically responsible and reliable steward of capital's interests. And in the age of austerity, that means giving the green light to cut "entitlement" programs the Republicans have been itching to attack for years.

"Obviously, there will be some Democrats who don't believe we need to do entitlement reform," a Democratic official told the Washington Post. "But there seems to be some hunger to do something of some significance. These moments come along at most once a decade. And it would be a real mistake if we let it pass us by."

Obama's right turn isn't simply political opportunism or a bid for independent voters in 2012. His proposed cuts are part of a drive by the U.S. capitalist class to overcome the crisis by pushing the cost onto working people and making the U.S. economy more competitive by cutting wages and lowering social spending. It's an agenda shared by Democratic governors who have targeted public-sector unions in Illinois, California, New York and Connecticut.

Will all this sink Obama's chance for re-election? Maybe not, given that the Republicans can always be relied on to steer ever further to the right. The Democratic base that was inspired to vote for Obama in 2008 may well feel frightened by the alternative should they fail to turn out in 2012.

But for a growing number of people, that isn't enough. After all, the lesser of two evils is still an evil. With austerity and suffering for the working class now the official bipartisan consensus in U.S. politics, many people will be looking for alternative politics and organizations that are prepared to fight the cuts, whether they are pushed by Republicans or Democrats.