We won’t be silenced

Our movement is facing an organized attack on our rights--and we need to respond.

THE POLITICAL representatives of the 1 percent are carrying out a carefully organized assault across the country--with the aim of destroying the Occupy movement.

The post-midnight military-style raid on the birthplace of the Occupy movement in New York City's Zuccotti Park on November 15 was the culmination of a series of attacks on encampments around the country, from Oakland to Philadelphia and Atlanta to Portland. In nearly every case, the assaults were carried out on orders from Democratic Party mayors--showing without a doubt that the "party of the people" isn't on the side of the 99 percent.

But if the 1 percent thought their raids would intimidate Occupy activists into silence, they thought wrong.

In New York, hundreds responded to an emergency alert in the middle of the night, and the next day was filled with running confrontations over the future of Zuccotti Park. In Oakland, Occupy activists gathered again in Oscar Grant Plaza for a General Assembly hours after they were evicted. In Portland, the movement is building for student walkouts on November 16 and the November 17 national day of action. 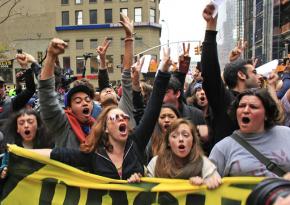 The police raids and attempts to shackle the movement with new legal restrictions are a tipping point in the struggle. Whether they succeed or not will determine its future shape and direction. But supporters of Occupy are determined that the struggle will continue, whether or not it must take a new form.

Our movement must use every opportunity to defend our camps and stand up for the right to protest--and also to organize a bigger movement, more rooted throughout U.S. society. We can do both in the coming days by mobilizing the largest numbers we can for the battles to defend encampments--as well as for the November 17 national day of action set by Occupy Wall Street in solidarity with labor.

THE MOVE to raze the Occupy Wall Street camp may have taken activists by surprise--but it wasn't unexpected.

All signs point to the crackdown on the Occupy movement nationally being a coordinated one--and if anyone doubts it, Oakland Mayor Jean Quan provided the evidence. In an interview with the BBC, she let slip that last weekend's operation to clear the Occupy Oakland encampment came about after a conference call "with 18 cities across the country who had the same situation."

Politicians and business leaders have grown increasingly annoyed with the encampments that are speaking truth to power in downtowns and financial districts, on campuses and in neighborhoods--and the corporate media has dutifully repeated the slanders and distortions of their propaganda campaign against Occupy. The raids are the latest stage of the counter-offensive.

The lengths to which America's elite will go to break the Occupy movement was clear from the attack on Zuccotti Park. As the New York Times reported, the operation was "minutely planned," weeks in advance:

The overnight hours of Monday into Tuesday were chosen because it was believed the park would be at its emptiest, the police said. The operation was kept secret from all but a few high-ranking officers, with others initially being told that they were embarking on an exercise when they set out on Monday evening...

The operation came after weeks of planning. Police officials watched how the occupations in other cities played out...[and] held conference calls with colleagues in other cities. They increased so-called disorder training--counterterrorism measures that involve moving large numbers of police officers quickly--to focus on Lower Manhattan.

The symbolism was unmistakable: A ruthless raid on peaceful protesters camped out in the shadow of Wall Street, ordered by a billionaire mayor--the 1 percent cracking down on the 99 percent.

Mayor Michael Bloomberg and fellow city officials claimed they were responding to "health and safety concerns" and that the park would be "cleaned and restored" before reopening in the morning.

What actually happened was that hundreds of cops in riot gear rampaged through the plaza, trashing tents and the Occupy Wall Street kitchen, and destroying thousands of books in the "People's Library." That, apparently, is Bloomberg's definition of "cleaned and restored"--destroying what protesters took two months to build up, and claiming to do it all for the benefit of the "public."

Bloomberg said in a statement that Zuccotti Park must, by law, "be open for the public to enjoy for passive recreation 24 hours a day. Ever since the occupation began, that law has not been complied with" because protesters had taken over the park, "making it unavailable to anyone else."

Likewise, if there was still any doubt, the role of the police was laid bare on November 15. The cops behaved brutally to anyone who defied them, arresting as many as 200 peaceful protesters, inside and outside Zuccotti Park. New York City Council member Ydanis Rodriguez was left bleeding from a head wound after he was beaten and arrested as police forced activists away from the park.

Despite the repression, hundreds came out in the streets to challenge the assault, and more returned the following morning. Early in the day, lawyers for the Occupy movement succeeded in winning a court order against Bloomberg's arbitrary rule that Occupy activists wouldn't be able to set up tents or camp in Zuccotti Park when it was reopened.

But the city simply defied the ruling, keeping lines of riot cops in place to stop anyone from reentering Zuccotti Park--until Bloomberg's henchmen found a state Supreme Court justice to overturn the lower court order.

As Salon.com's Glenn Greenwald put it, the real criminal is sitting in the mayor's office:

Bloomberg this morning has broken more laws than the hundreds of protesters who were arrested. But as we know, the law does not apply to the Michael Bloombergs of the nation; the law, instead, has simply been exploited into a weapon, used by the politically and financially powerful to prevent challenges to their standing.

OF COURSE, it's not only billionaire Republicans carrying out the attacks.

In Portland, liberal Democratic Mayor Sam Adams issued the eviction order. And in Oakland, Jean Quan--a Democrat with a long history of labor activism and community organizing--sent in police for a second time to raid the encampment.

All the mayors say they are only acting out of concern about "public safety and health" and to "uphold the law." Bloomberg, for example, declared following the raid: "I could not wait for someone in the park to get killed or to injure another first responder before acting. Others have cautioned against action because enforcing our laws might be used by some protesters as a pretext for violence--but we must never be afraid to insist on compliance with our laws."

But it was police who pulled down tents in Zuccotti Park without checking first to see if anyone was inside. In Berkeley, it was the cops who bludgeoned peaceful students with billy clubs. In Oakland, it was police who nearly killed Scott Olsen, an Iraq war veteran who was struck in the head with a tear gas canister after cops rioted against Occupy demonstrators.

In city after city, the politicians and the police are the ones who have turned to violence, not anyone connected to the Occupy movement. The idea that these public officials care about the welfare of ordinary people is laughable.

In Portland, Adams even had the gall to claim that he supports Occupy--and his order to evict protesters from their encampment was in the movement's best interests. "I have said from the beginning that I believe the Occupy movement would have to evolve in order to realize its full potential," he declared.

As valuable as Mayor Adams' advice no doubt is, the Occupy movement is absolutely right to consider him an enemy who is protecting the interests of the 1 percent.

Anyone who knows the history of the civil rights movement will hear an echo of the past in the claims of politicians and police that they are merely "keeping order" and "doing their jobs."

Laurie Pritchett, the one-time police chief of Albany, Ga., set a new standard for Southern sheriffs battling the civil rights movement. When the movement began a campaign in the city in late 1961, Pritchett deliberately implemented a strategy of using mass arrests, but avoiding violence that could attract sympathy for activists. His justification whenever questioned was that he was simply doing his job and "following the law."

You can hear almost identical justifications today from Bloomberg, Quan, Adams and all the rest. They say they support the right of people to protest, but that Occupy activists are going too far, and their activities must be curbed for everyone's good.

But the people participating in the Occupy movement are tired of being told to wait--tired of watching poor and working class people suffer while the rich get richer; tired of never-ending unemployment; tired of overwhelming student loan and health care debts.

The lives of the 99 percent are disrupted every day by poverty, debt, joblessness, lack of affordable health care, inadequate schools and more. Why shouldn't the lives of the 1 percent be disrupted in the pursuit of some measure of justice and equality?

The recent raids and arrests should be seen for what they are: a national assault on the right to peaceful protest. The 1 percent has no answers to the questions the Occupy movement is demanding of them--no answers other than trying to increase their wealth and power at our expense, and using police repression against those who dissent.

Across the U.S., more than 3,600 Occupy protesters have been arrested in the two months since the Occupy movement began--even as the criminals on Wall Street continued their pillaging of the economy.

Whether their attacks on our movement are "peaceful" or "aggressive," delivered with claims of sympathy or not, the politicians are united in their defense of the 1 percent.

We have to be united in our opposition to their attempts to silence us. The fight is on in cities across the country to defend encampments and our right to protest. And on November 17, activists in many cities will participate in a labor-backed national day of action that can continue the process of building a broader Occupy movement, with more and more people mobilized behind it.

All these actions send a message, loud and clear: The political representatives of the 1 percent may get away with the attack on our encampments, but they'll never silence the anger, the desire for change and the determination to struggle that is at the heart of the Occupy movement.