The Feds’ war against Occupy

Nicole Colson reports on the revelations about the systematic cooperation between the FBI and big business to spy on the Occupy Wall Street movement.

FROM THE earliest days of the Occupy Wall Street movement in the fall of 2011, the U.S. government spied on peaceful protesters, labeled them as potential terrorist threats--and shared the information with a variety of corporate entities.

Heavily redacted documents unearthed by the Partnership for Civil Justice Fund (PCJF) through a Freedom of Information Act request show the dramatic lengths the FBI went to in spying on the Occupy movement and in collaborating with both local law enforcement and Corporate America.

Mara Verheyden-Hilliard, executive director of the PCJF, told Democracy Now! that the documents:

show that the FBI and American intelligence agencies were monitoring and reporting on Occupy Wall Street before the first tent even went up in Zuccotti Park. The documents that we have been able to obtain show the FBI communicating with the New York Stock Exchange in August of 2011 about the upcoming Occupy demonstrations, about plans for the protests. It shows them meeting with or communicating with private businesses.

And throughout the materials, there is repeated evidence of the FBI and Department of Homeland Security--American intelligence agencies really--working as a private intelligence arm for corporations, for Wall Street, for the banks, for the very entities that people were rising up to protest against. 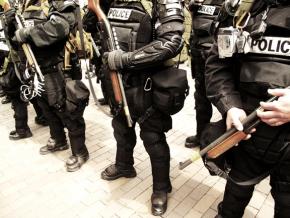 Verheyden-Hilliard said that the PCJF has been demanding the release of the documents for over a year, but the FBI repeatedly stonewalled the group, only to finally hand them over on the Friday before Christmas--when they were guaranteed to be ignored by the mainstream media.

Verheyden-Hilliard also said that the documents suggest that, in at least some cases, private security forces and other agencies sent infiltrators into the Occupy movement--and that the resulting information was shared among the FBI and private companies. One document, she stated:

shows the FBI meeting with private port security officers in Anchorage, Alaska, in advance of the West Coast port actions. And that document has that private port security person saying that they are going to go attend a planning meeting of the demonstrators, and they're reporting back to the FBI...The FBI says that they will put them in touch with someone from the Anchorage Police Department, and that person should take the police department officer with him as well.

FBI OFFICIALS met with representatives of the New York Stock Exchange in August 2011, weeks before the first Occupy Wall Street protests had even taken place. Labeling the planned Occupy protest an "anarchist" event, the memo noted, "Numerous incidents have occurred in the past which show attempts by anarchist groups to disrupt, influence and/or shut down normal business operations of financial districts."

The documents also include a report by the Domestic Security Alliance Council (DSAC)--which is, according to the federal government, "a strategic partnership between the FBI, the Department of Homeland Security and the private sector." The DSAC report discussed protests aimed at shutting down the West Coast ports and specifically designed for use by the "corporate security community"--in other words, for the use of Big Business.

The report is, as the PCJF put it, a window into "the nature of secret collaboration between American intelligence agencies and their corporate clients."

The documents also show that the Virginia FBI turned over information on the Occupy movement to the Virginia Fusion Center--a project of the Virginia state police designed to "improve the Commonwealth of Virginia's preparedness against terrorist attacks and to deter criminal activity," according to the center's website. The Fusion Center boasts of its partnership with federal law enforcement, the military and "private industries," among others.

In another instance, the Jackson, Miss., FBI attended a meeting of the Bank Security Group in Biloxi, Miss., with several private banks and the Biloxi Police Department. During the meeting, attendees discussed an announced protest for "National Bad Bank Sit-In-Day" on December 7, 2011.

In at least six cities, campus police at colleges and universities willingly turned over information about students involved with Occupy to the FBI--with the knowledge of the administrations.

And in one of the more frightening passages in the documents, an unidentified person or group is said to have "planned to engage in sniper attacks against protesters in Houston, Texas, if deemed necessary." The unidentified person or group "planned to gather intelligence against the leaders of the protest groups and obtain photographs, then formulate a plan to kill the leadership via suppressed sniper rifles.

It's unclear what actions, if any, the FBI ever took to notify Occupy activists whose lives may have been at risk.

WHILE NOT necessarily surprising to activists who have experience with the FBI, police or state repression, the documents show conclusively that--despite the Occupy movement's nonviolent practice--the FBI labeled Occupy protests as potentially violent criminal actions (often by simply using the shorthand label of "anarchist") or even terrorist threats. This later helped justify the police assaults on Occupy encampments in cities across the U.S.

As Verheyden-Hilliard told Democracy Now! the FBI memos contain no evidence of "real threats of violence." Instead, the memos themselves are evidence of the criminalization of dissent:

I think we can be sure that if [the FBI] had evidence of criminal activity, they wouldn't have redacted it. They would have been happy to produce that. But they don't have it. And over and over again, you have the FBI and the Department of Homeland Security basically conducting themselves in a form of police statism in the United States against the people of the United States.

The documents show the FBI was aware that the Occupy movement was nonviolent. Yet the agency used the imagined scenario of "terrorists" implanting themselves among Occupy activists as subsequent justification for abusive spying practices. As Verheyden-Hilliard told Democracy Now!:

[B]y that logic, of course, you can investigate everyone in every activity in the United States on the grounds that someone might do something sometime...Think about the Tea Party rallies. The Tea Party was having rallies all around the United States, where their members come carrying weapons...including at events where the president of the United States was speaking. But the FBI is turning its attention to this movement...

I think that's actually a political analysis, a recognition that this is a movement whose time has come. And whether it's in hibernation right now, it is based on an organic reality of the economic situation in the United States.

The documents also illustrate how law enforcement in the U.S.--from the national to state and local levels--is subservient to the interests of big business.

The DSAC document is a particular case in point. As Naomi Wolf wrote for Britain's Guardian, it "shows a terrifying network of coordinated DHS, FBI, police, regional fusion center and private-sector activity so completely merged into one another that the monstrous whole is, in fact, one entity."

For the tens of thousands of people in the U.S. who participated in the Occupy movement and its various offshoots, and the millions more who sympathized with the movement's aims, the release of these documents should be a wake-up call about what the government and Corporate America will do to suppress dissent.