Balanced between solidarity and racism

On Friday, as the two suspects in the Boston Marathon bombings were killed or captured, the city showed two different faces to the world. British socialist Richard Seymour, author of American Insurgents: A Brief History of American Anti-Imperialism, who was in Boston this past week on a book tour, explains, in an article written for Britain's Guardian website.

EVEN WITH two bombing suspects identified, one shot and one captured after an intensive manhunt, no one understands yet why the Boston Marathon was targeted. There is security, but it has always been a relaxed event in which unofficial runners frequently join the race. Yet the subsequent violence in the early hours of Friday morning has been even more bewildering.

On Thursday night, the suspects allegedly held up a 7-Eleven convenience store, then shot and killed a security officer on the Massachusetts Institute of Technology campus, before carjacking an SUV and holding the driver captive for a period. There followed, according to reports, a high-speed car chase, a gunfight with at least one exploding improvised explosive device. Finally, one suspect was apprehended, but died of his wounds in hospital; while the other, his brother, Dzhokhar Tsarnaev, was finally captured on Friday evening in Boston's Watertown neighborhood.

The response had been an escalating state of emergency. While residents in Watertown heard gunshots and explosions, other Bostonians were glued to their police scanners all night and all day, morbidly fascinated by the grim story. 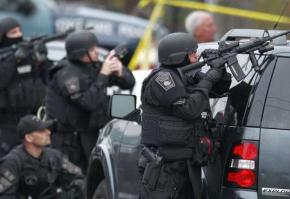 Then, on Friday morning, businesses were asked to stay closed. The public transportation system was shut down. Taxis stopped operating. Police checkpoints were stopping and searching cars. Amtrak train services to and from Boston were suspended indefinitely. The city was under an unprecedented lockdown, with military-style tanks flanked by heavily armed and body-armored police officers cruising down residential streets.

Even in those parts of the city not directly affected by the manhunt, there has been a heavy police presence. But for a lone Dunkin' Donuts remaining open, it looked a lot like martial law.

WITH AS little as we know about the attackers' motives, there seems no logic to the attacks, and this has accentuated some terrible ambiguities.

In one sense, all of Boston seems united in grief and sympathy. Earlier this week, Bostonians were surprised to receive solidarity messages from people in Afghanistan, Yemen and Syria. In Kabul, for instance, people who are themselves surrounded by routine bombardment, held up signs reading, "To Boston, From Kabul, With Love".

And yet, the city is also bitterly divided, in a way that is hard to acknowledge.

Boston is one of the most segregated cites in America. Its police force is experienced quite differently by its ethnic minorities than by its white majority. While many white Bostonians may feel reassured by the presence of police, 1,500 National Guard troops, and SWAT teams, those who fear they could be targeted and blamed are less sanguine. And now that the suspects have been identified as Muslims, Chechens who gained asylum in the U.S. as children, this remains a time of particular anxiety.

Spurred by some flagrantly irresponsible journalism--the New York Post first identified a Saudi national as a suspect, and then misidentified two young men in photographs of the crowd at the Marathon--there have already been racist incidents. For example, Heba Abolaban, a Muslim woman, was punched in Boston by a white assailant on Wednesday morning, who screamed, "Fuck you, Muslims! You are terrorists!" In press conferences, journalists demanded to know how the authorities intended to track suspects if they turned out to be an immigrant. (Don't worry, they were told, the Immigration and Customs Enforcement agency is part of the Joint Terrorism Task Force.)

Since the identity of the suspects was revealed, there has been a shift in focus. A few have struggled to comprehend the difference between a Chechen and someone from the Czech Republic. Some right-wing politicians, such as Republican Rep. Peter King, have wasted no time in honing in on the fact that the perpetrators were Muslim, and have called for increased surveillance of Muslim communities. Others have questioned whether the proposals in bipartisan immigration legislation are "too generous" to would-be immigrants.

Yet racism is not the only response. On Thursday night, before the dramatic manhunt, at a well-attended meeting entitled "Don't let them turn tragedy into racism" at Harvard University--not far from where the attacks began--a Boston nurse spoke out. He had tended to some of the wounded in what is, for Boston hospitals, a "code orange" alert. He was reminded of Rosa Luxemburg's remarks about the disastrous volcanic eruption in Martinique in 1902:

And now in the ruins of the annihilated city on Martinique, a new guest arrives, unknown, never seen before--the human being. Not lords and bondsmen, not Blacks and whites, not rich and poor, not plantation owners and wage slaves--human beings have appeared on the tiny shattered island.

This, the nurse said, is how it was for those first responders, rescuers and emergency personnel taking care of the wounded. "Then imagine how I feel, seeing the New York Post scapegoating a young man, a victim of the tragedy, in a racist way. Fuck them," he said. "A thousand percent."

This is the knife's edge on which Boston is balanced: between solidarity and racism.

First published at the Guardian.