The tremors from Scotland

The "No" vote won in a referendum on whether Scotland should be independent from Britain, but the reverberations of the vote and the political ferment that preceded it will be felt for years to come. Here, we compile comments by Pete Cannell, Hanif Leylabi and Richard Seymour from the Revolutionary Socialism in the 21st Century and Lenin's Tomb websites.

Yes campaign falls short, but its legacy must endure

By Pete Cannell | The enduring legacy of the last few weeks and months in Scotland will be the energy, clarity and vision of all those grassroots campaigners who campaigned for a Yes vote. This is what a mass movement looks like. There have been hundreds of meetings across Scotland in big urban centers and in small towns and villages. Everywhere you went there was evidence of local, individual and collective initiatives. The contrast between the mass Yes campaign and the establishment politicians who headed up No couldn't have been more stark. Worst of all in my mind was the late appeal of Gordon Brown to Old Labour values of solidarity and sharing: utter hypocrisy when, as chancellor and then prime minister, he set the framework for the effective privatization of education and health in England.

We may have lost the vote, but we've seen a glimpse of what another Scotland and another world could look like when the imagination and creativity of "ordinary" people are set free. It didn't have to be like this, but as the campaign grew it captured a spirit of resistance grounded in the popular view that the Westminster government was discredited. National consciousness and a desire for change have grown and developed together, through disgust with military adventures abroad and their consequences and through opposition to austerity. The effective defeat of the bedroom tax this year, and the defeat of Edinburgh City Council's attempt at wholesale privatisation of services a year before, heralded this mood. 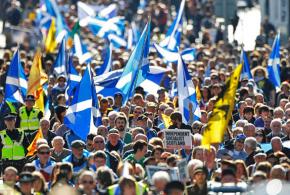 The vote was emphatically a vote against neoliberalism, against austerity and for real change. There is an urgent need now to keep the strength and insurgent spirit of the Yes campaign together. In particular, the people who engaged with and were influenced by the Radical Independence Campaign will be critical in shaping the future direction of the left. There is the best opportunity in a generation to organize collectively to build a movement against austerity and for radical change, based in the workplaces, schools, colleges and working class communities.

Let's make it clear that Cameron, Clegg and Brown may have secured the vote--but they haven't won hearts and minds.

The class divide is clear to see

By Hanif Leylabi [Note: This article was published on September 18, the day of the referendum vote] | The energy and debate generated by the referendum was clear from the moment my train pulled up at its first Scottish stop. The sheer volume of campaign stickers tells you that this referendum has engaged and involved huge swathes people, including those who have never voted before.

What was also immediately clear was the class divide around the campaign. The vast majority of people wearing No stickers in Edinburgh city center were wearing business suits. The Yes stickers in contrast were worn by a far broader cross-section of the population, including manual workers in their work gear.

Albert Drive polling station in Pollockshields, Glasgow, saw a constant stream of voters. It is located in an area with large Pakistani and Kashmiri communities. Labour councillors and businessmen made a huge effort to win the votes of local Muslim people for the No campaign--but the area was awash with Yes material, and Yes stickers were gratefully grabbed from my hands.

The recent mobilisations around Gaza helped bring together Palestinian solidarity protesters with campaigners for Scottish independence. This process of working side by side forged relationships that were able to attract many Labour voters to the Yes cause.

Humma Majid, 23, is studying education and social services at the University of Strathclyde. She campaigned late into the night for a Yes vote. "I was born and bred in Glasgow," she said. "I'm here because Scotland's people should make their own decisions rather than having a Westminster government who we didn't vote for making decisions for us."

In George Square hundreds of Yes supporters sang songs, played music and waved flags. One man's placard read: "The only banks we will lose are food banks." This typified the motivations of many of those casting their vote for independence.

Tensions flared at one point as No voters held up British flags and shouted abuse at a man wearing a Celtic football top and carrying a Scottish saltire. "That flag is part of the Union Jack and we're British!" said one No voter. "Only till tomorrow!" came the reply.

In a few hours, we will know if this will be the case. But we can be sure that austerity, nuclear weapons, privatization and social justice have been thrust into the political center stage by the Yes campaign. It has reached an army of people disenfranchised, disenchanted and poorly served by the neoliberal politics of successive Westminster governments. Many have for the first time felt they could mount a challenge the establishment.

The left has to lay down roots in these newly confident working class communities across Scotland. The mobilization unleashed by this referendum has the potential to change Scotland on a deeper level than the mere fact of independence. The Yes campaign has allowed working class communities to feel strong--and whatever the referendum result that is a power that can and must be built on.

Union of fear and loathing

By Richard Seymour | The Unionist side won, decisively, on a big turnout.

However, it did not win because it prevailed in the "battle of ideas," such as it was. The utter cluelessness of the Unionists was apparent from day one. It was evident in the futile insistence of Scottish Labourites that "we are as Scottish as anyone else," as if anyone had ever queried it or--frankly--given much of a shit. It was evident in the little brainstorm Ed Miliband experienced toward the end of the campaign, whereupon he invited the English to wave the saltire, thus proving to the Scots that they are far better off in the company of UKIP-voting Clacton than living under the regime of that man off the television. And is still clear today when Scottish Labourites such as Douglas Alexander murmur with faux innocence about how dangerous it is that politicians--the Westminster elite, let us call them--are obviously held in such contempt. They have no ideas, and no idea.

The Unionist side won due to a combination of Project Fear and imperial nationalism. Neoliberal subjectivity, most aptly summarized in Margaret Thatcher's phrase "there is no alternative," is predicated on a particular computation of risk. If you try to buck the market, this calculus says, the market will punish you. Interest rates, house prices, jobs--all will go loopily out of sync. Stick with the unjust, perilous, insecure, savage and worsening regime you're stuck with, grin and bear austerity, hope for the best. This was the subtext of the "risk" talk coming from the Bank of England, the business press, EU austerians, and the Westminster elite. Even the risible defense of the British welfare state, after decades of decimating it, contained the implicit codicil: "Stick with the neoliberalized British version, because the Scandinavian welfare system you want is just a pipe dream."

The most interesting thing about nationalism in this debate is that the most belligerent nationalism of all was simply invisible to some. Unionists could stand in front of a sea of red, white and blue, and decry "narrow Scottish nationalism," with no apparent sense of irony. They can drop the "two world wars" meme one minute, and deride national chauvinism the next. This, of course, is itself a record of the peculiar power of British nationalism. Whenever an ideology is so pervasive that one inhabits it, lives in it, such that it is simply taken for granted--when it is, in a word, naturalized--that is when it has achieved the peak of its success. But there's something else. British nationalism is "global," precisely because it is imperial. To have a British identity is, for many, to have access to the world. This is the sense in which Scottish nationalism is, by contrast, "narrow,"

What is perhaps most contemptible and laughable in all of this is that a section of the left is convinced that something precious and progressive was saved by the votes of Scotland's older and richer electorate. That precious something, apparently inconceivable across borders, is class solidarity. But in making this case, they have been compelled to play a remarkable game of forgetting. George Galloway forgets that his job is to expose and oppose Tory austerity rather than to pretend it's over. Gordon Brown forgets that he began the privatization of the NHS, and poses as its stalwart defender. They will do all they can to forget about the bigoted, authoritarian and reactionary forces that have been prepared over a decade of "Britishness" pedagogy, unleashed in the course of this campaign, and victoriously rioting in George Square yesterday--though they have no right to deny the role of such anti-democratic nationalism in securing their victory. And if they can, they will forget that the English chauvinism and ressentiment now vocalized by Nigel Farage and pandered to by David Cameron is the heart and soul of "Britishness."

It is fitting and appropriate, then, that in Gordon Brown, the "No" lefties have found their ideal nemesis of narrow Scottish nationalism. For here is the famous champion of "British vawl-yews," of "British jobs for British workers," of pride in the empire. Here is a man who never shirked the bloody deeds necessary to Britain's continued global pertinence. Here is the chancellor who did more than any other to unleash the City of London, as the apex of 21st Century Britannia. Here, condensed in one man, is the central vice of Labourism: achieving everything one's apparent enemies would wish to achieve, only better. How right that Labour Unionists are creaming themselves with adoration over this tragic figure.

But to see him extolled as a champion of the welfare state, public services and social solidarity! Even I, with my perverse predilection for the darkest ironies, find that a bit much. He is capable and might well be able to win Scotland for Labour, particularly now that Salmond has stepped down. But if he does so, it will be in the name of austerity, privatization and decades of social wreckage that will make Thatcherism seem like a dewy-eyed dream.

Still. At least it can never be said of the British Left that it is inhibited by vulgar sentimentality.