Why checking your privilege isn’t enough

Sharon Smith, author of the forthcoming Women and Socialism: Marxism, Feminism and Women's Liberation and Subterranean Fire: A History of Working-Class Radicalism in the United States examines a question that faces a new generation of activists dedicated to challenging oppression and bigotry.

FIRST, THE Justice Department of Justice releases the Ferguson Police Department's racist and sexist internal e-mails. Then, a video appears showing Oklahoma University's Sigma Alpha Epsilon fraternity brothers in a drunken rendition of a racist song about lynching. Then, an e-mail surfaces written by a University of Maryland frat member that contains stunningly racist caricatures of Black, Indian and Asian women--while emphasizing (via expletives) that he doesn't need to obtain consent for his planned sexual escapades at an upcoming party.

All this happened in the space of just two weeks in March.

There is an epidemic of stomach-turning bigotry today, illustrating the grotesque levels of social inequality in contemporary capitalism.

For four decades, the capitalist class has been united in a sustained bipartisan project, attacking all the gains of the 1960s social movements, combined with an assault on the organizations and living standards of the working class as a whole. This project, now known as neoliberalism, has taken a heavy toll, both materially and ideologically. It is not a coincidence that the same policies that produced a return to Gilded Age heights of class inequality also produced vile levels of misogyny, racism and anti-LGBT bigotry in the political mainstream. 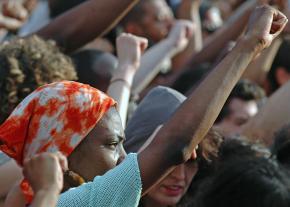 At the same time, though, these reactionary excesses have begun to lead to resistance from below, with the rise of a new generation of radical activists. The dramatic growth in class inequality since 2008 caused a sharp increase in political consciousness--demonstrated by the Occupy Wall Street movement at the end of 2011. That same year, after a Toronto police officer warned women students not to "dress like sluts" to avoid being raped, the Slutwalk movement spread like wildfire across North America.

Today's generation of young radicals define themselves by a commitment to opposing all forms of oppression--including racism, sexism, homophobia, disability oppression, class inequality and any number of other forms of discrimination and bigotry.

Indeed, the protests that began in August 2014 in response to Mike Brown's murder by a Ferguson, Missouri, police officer only grew in size and intensity after grand juries refused to indict the officer who killed Brown--or another in New York City who killed Eric Garner on the streets of Staten Island just weeks before Mike Brown.

These mass protests against racist police brutality, which were multiracial and youth-led, have come together in the Black Lives Matter movement--a very hopeful sign in the otherwise dismal picture of current U.S. politics.

BUT THE dominant politics of the radical left have changed significantly since the 1960s and early 1970s, when revolutionary movements swept the nation. An air of pessimism has characterized most radical social theory throughout the neoliberal era. Many left-wing academics reacted to the neoliberal onslaught by turning away from revolutionary politics, embracing postmodernism instead.

The contributions of postmodernism should not be underestimated--most importantly, its insistence on prioritizing the fight against oppression on every front. This includes the oppression experienced by trans people and those who suffer from disabilities, among other forms of oppression that have previously been neglected on the left.

But at the same time, most postmodernists dismiss socialist theory out of hand as "reductionist" and "essentialist"--because Marxism locates the source of class and social inequality in the capitalist system.

Debates about strategies for achieving systemic change were once common among left-wing academics. But postmodernists tend to focus on subjective, individual and cultural relations as centers of struggle--including reclaiming or re-appropriating oppressive language as a tool to combat oppression. In activist practice, this emphasis on interpersonal relations is tied to the more recent custom of "privilege-checking" in broad left circles.

While the misery caused by the system is obvious to all those who are radicalizing today, the potential power of ordinary people--workers--to transform society is not. This is entirely understandable, given the near absence of class struggle in recent decades. There has never before been such an extended period of working-class retreat and defeat in modern U.S. history. Most radicals today have had little or no opportunity to experience firsthand the solidarity that is palpable among workers involved in an open-ended mass strike.

Anyone under the age of 40 knows only a lifetime of declining living standards, defeat and setback, with very few victories in between. In this context, prioritizing interpersonal relations makes sense as a way to concretely improve the lives of those who are marginalized and oppressed by the bigotry so prevalent in society.

This interpersonal focus helps to maintain the influence of postmodernism on the broad left--even among many activists who have no familiarity with postmodern theory or how privilege-checking as a strategy for social change emerged from its pessimistic worldview.

IN 1989, Peggy McIntosh's influential essay "White Privilege: Unpacking the Invisible Knapsack" introduced the concept of "privilege" to that generation of students, but it also has been widely read by every generation since.

The essay forces its white readers to appreciate the many ways that racism victimizes people of color in everyday life. This is, unfortunately, a revelation to many whites, given the persistence of racial segregation in U.S. society. Thus, McIntosh's essay raises individual awareness about racism, an enormous achievement by itself.

But McIntosh also lacks a class analysis, tending to describe whites as exclusively middle class, when most are actually part of the working class. Moreover, while providing the descriptive framework of white privilege widely accepted among radicals today, McIntosh did not attach it to any particular strategy for combatting racism. Finally, the essay's definition of racial inequality is framed as the difference between those who possess white privilege and those who don't, without acknowledging racism's systemic roots.

In reality, capitalism relies on both exploitation and oppression. Exploitation is the method by which the ruling class robs workers of part of the value of their labor in order to acquire profits. Various forms of oppression play a primary role in "dividing and conquering" the working-class majority.

To be sure, calling out racism, sexism, homophobia and other reactionary attitudes is a necessary part of fighting oppression in daily life--and apologies from the offending parties are always welcome. But this is also a far cry from what is needed to end oppression.

Language is far from irrelevant. But changing the use of language on a mass scale requires a mass movement, as demonstrated by the social movements of the late 1960s.

Within a few short years, the Black Power movement succeeded in replacing the racist term "colored people" with "Blacks" in mainstream discourse, while the women's liberation movement replaced the demeaning "girls" with "women." Likewise, the long-standing movement among queer activists since the 1980s--who struggled militantly around the slogan, "We're here, we're queer, get used to it"--has transformed the word "queer" from a derogatory term into a positive description, even in the political mainstream.

WHILE THERE is no doubt that those who take part in privilege-checking are well intentioned, this practice ends up backfiring in the following ways:

The radical left in the U.S. is very small today, and activists can easily become inward and insular in their outlook, creating an echo chamber instead of reaching outward. It is one thing to project hostility toward a genuine reactionary; it is quite another to humiliate others on the activist left who support progressive social change, simply because they do not already share the outlook or language of the self-identified radical left.

In this context, it is important to acknowledge that the language of radicals has changed rapidly over the last decade. The word "cisgender," for example, was introduced as an antonym to "transgender" in 2006. Cisgender is an adjective describing those whose sexual identities correspond to the biological gender they were assigned at birth. The term "cisgender privilege" did not appear until 2010.

While now established within left-wing political discourse, neither concept has yet entered popular vernacular. Shaming those not already acquainted with current radical language is more likely to alienate them than to win them to joining the left.

The practice of privilege-checking relies on its own fairly mechanical method of determinism--placing its overriding emphasis on who is making a particular argument or accusation, rather than its content. Those who are privileged in a given situation can only offer support and apologies, while calling out others who are privileged.

In this context, moralism can easily supersede politics--and prevent the kind of honest and useful debate that is essential to democratic norms. It is easy to see how this approach can inhibit the free exchange of ideas--including necessary political debates--between and among those who are all actively committed to combatting oppression.

Because the concept of privilege often relies on subjective judgments, it can downplay or ignore the objective class relations integral to capitalism. Thus, some on the radical left have taken to describing unionized workers as a "privileged elite" because of their relatively higher wages and better working conditions compared with non-unionized workers.

The anti-capitalist author Bromma, for example, argued in the recently published book The Worker Elite: Notes on the "Labour Aristocracy" that unionized workers comprise a "parasitic" section of the middle class. As Bromma argues, "Its prized middle class status comes from a preferential social contract, approved and paid for by the bourgeoisie." On the basis of this alleged collusion between union workers and the capitalist class, Bromma concludes, "The parasitic and patriarchal agenda of this class must be defeated."

In reality, the (shrinking) advantages that union workers gained in wages and working conditions were the result of their own hard-fought struggles against capitalists--while union workers' living standards and organizations are currently targeted for destruction on the neoliberal agenda.

TODAY, WE face an ideological onslaught that resembles that of the 1950s. But the reactionary 1950s ultimately gave way to the radical movements of the 1960s. Ruling-class ideology is not unassailable. Its success depends on acquiescence from below, and it is therefore susceptible to the rise of resistance. The extreme ideological excesses that exist today historically produce opposition movements.

The rise of the Black Lives Matter movement over the last year signals the beginning of such an opposition movement, with the potential for expanding the current radicalization. The challenge that radicals face moving forward is determining which set of politics can most effectively build a mass movement capable of combatting oppression at a systemic level.

Such a movement will require solidarity and shared trust among all who are fighting on the same side, and the patience necessary to maintain mutual respect when there are disagreements inside the movement.

Moreover, the working class today is composed of many races, sexualities and gender identities, which can propel issues of racism and other forms of oppression to the center of the class struggle in ways that would have been unimaginable in the past.

For example, the 2012 Chicago Teachers Union strike was waged not only over compensation and working conditions for teachers--a majority women workforce, but as a social justice struggle against racism and school closures, which involved not only teachers but also parents and students.

The Chicago teachers' strike provided just a glimpse of the possibilities that lie ahead for combining the struggles against exploitation and oppression. The revolutionary potential of the working class as it is currently composed has yet to be seen. But it can at long last be anticipated.