What’s driving the world toward a new slump?

The recent swings in world financial markets and the growing international effects of an economic slowdown in China have raised fears in the U.S. that the economic recovery could be on its last legs--even before working people felt like they had escaped the last crisis. And what will come next? In part one of a three-part series, Lee Sustar looked at the causes and consequences of the Great Recession and the impact of China's slowdown. This second installment answers questions about how the crisis reshaped the European economy--and why it's proving so hard to overcome there and around the world.

HOW DOES the turmoil in financial markets and the slowdown in China described in the first part of this series relate to Europe's crisis over Greece, austerity and the euro currency?

THE DOMINANT European Union (EU) countries are trying to extricate themselves from a crisis of their own making, even as they cope with the rise of China and other developing countries.

The resulting conflicts and confrontations have exposed an aggressive new Germany that is determined to subordinate the rest of the EU to its own agenda and keep itself at the center of a huge economic entity that can meet the China challenge and assert itself in relation to the U.S., at least in economic terms.

Since its creation in 1999, the euro--the common currency used by 18 European countries--was a great deal for Germany. Since the euro was valued significantly below what Germany's old currency, the deutschmark, would have been, it effectively lowered the cost of German exports.

Plus, the German government signed off on including peripheral economies like Greece in the eurozone. That allowed the Greek government and consumers access to lower-interest loans initially--which helped finance German exports to Greece and the rest of the eurozone and beyond. At the same time, German corporations cashed in by expanding into lower-wage countries in Eastern Europe. 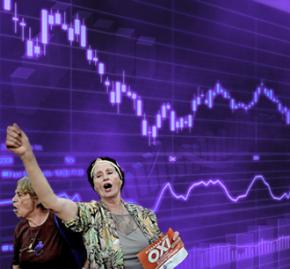 Then came the crash of 2008. After bailing out the banks--and, as in the U.S., effectively taking private debt onto the public books--the dominant EU countries turned to austerity in 2010-11 to push the cost of the "rescue" onto the working class. But the resulting budget cuts and other neoliberal measures strangled the weak economic recovery, and Europe slipped back into recession in 2011-2012."

It was in this context that Greece was compelled to accept extreme austerity measures even though its economy was in the midst of the worst collapse ever seen in peacetime Europe.

The immediate goal of the bailout of the Greek financial system, conditioned on the acceptance of austerity, was to protect the big European banks that held large amounts of Greek debt.

The first bailout in 2010 kept Greece solvent and paying its debts. The second in 2012 gave investors about 74 percent of their money back--a "haircut," to use the phrase economists use, but not as bad as it could have been. Meanwhile, Greek bonds held by the banks were transferred onto the balance sheets of the European Central Bank and other EU institutions to further insulate the financial system.

Where the economy is headed

In this three-part feature, Socialist Worker's Lee Sustar answers questions about the new signs of economic turmoil ahead and the political implications.

Now, Greece will endure a third bailout and accompanying "Memorandum" of austerity measures--agreed to by the left-wing SYRIZA government, which had come to power promising to reverse austerity, but which capitulated to pressure from the EU.

The third Memorandum is more political in nature. Essentially, it is an imperialist power play by Germany. Chancellor Angela Merkel and her hardline Finance Minister Wolfgang Schäuble want to put Greek society through even more hell in order to set an example--not only for other small countries, but to discipline bigger powers such as Spain, France and Italy, which are increasingly forced to bow to Germany.

Germany's aims are clear enough: It wants to remain at the top of the European pecking order, and the eurozone is a key part of that agenda. The euro helps keep German exports competitive on the world market--and Germany has lot of exports. Having lowered labor costs more than a decade ago through a series of anti-worker reforms, Germany is now much more productive than its EU neighbors.

In 2014, Germany had a trade surplus of $244 billion--even bigger than China's, and a remarkable level for a developed country. U.S. Treasury Secretary Jack Lew publicly criticized Germany for running a huge surplus, using the same terms that Washington uses against China for dumping steel at below-market prices.

Those tensions among the world's major economic powers are likely to get worse. For one thing, the German-dominated eurozone is fueling the growing global currency wars with the European Central Bank's (ECB) program of quantitative easing. The ECB is following the U.S. Fed's example in basically printing money--pumping the equivalent of $1.2 trillion into the system.

The aim is to get the sclerotic European economy growing again. Except for Greece, that is. According to Citigroup analysts, Greece, which has already seen its economy contract by 25 percent since 2009, will suffer an economic contraction of 2.4 percent in 2015 and 3.7 percent in 2016, thanks to the extortionate terms imposed on it by Germany and its lackeys in the EU.

Despite the massive cash injection, the European economy is still be on thin ice--QE has failed to have much of an impact so far. The China slowdown is a major factor in Europe, too. German exports to China grew 11 percent in 2014 but slowed to a 1.4 percent annual rate in the first five months of 2015. Since China's economy has likely slowed even more since then, that number will get worse.

There are also big questions about the health of the European banks, which critics say are undercapitalized and had to fudge their stress tests to meet regulators' standards.

WHY ARE the problems in Europe and elsewhere so intractable?

THIS TYPE of crisis would be familiar to Karl Marx. More than a century and a half ago, he began describing how the unplanned scramble for markets by competing capitalists created a tendency for production to overshoot the number of buyers for a given product. The result was that supply outstripped demand--there was simply too much to be sold at a profit.

As Marx and Frederick Engels wrote in The Communist Manifesto, "In these crises, there breaks out an epidemic that, in all earlier epochs, would have seemed an absurdity--the epidemic of over-production." Today the problem is not only that there are too many cars or too much steel on the market. There are also too many steel mills and auto plants for the world market to bear.

That reality has periodically pushed discussions of Marx's ideas into mainstream economic discussion. "Marx was right," said New York University economist Nouriel Roubini in 2011. "At some point, capitalism can destroy itself."

There's a lively debate among Marxist economists about the roots of the crisis. Some of the details are technical, but the basic argument is whether small-d depression in the advanced countries is rooted mainly in what Marx called that tendency of the rate of profit to fall that asserted itself in the early 1970s.

Others, such as the Canadian Marxist David McNally, contend--convincingly, in my view--that the 1980s and 1990s saw the system overcome the crisis of the 1970s with a reorganization of the world economy that restored profitability in the U.S. and most other advanced countries. Joel Geier of the ISO has made similar arguments since the 1990s and developed the argument further in recent years. McNally and Geier point out that dynamic new centers of capitalist accumulation formed in China, other BRIC countries and much of East Asia. This has led to a vast expansion of the productive economy internationally.

According to the World Bank, the combined GDP of all the world's countries more than doubled between 2000 and 2014 to $77.8 trillion, despite the recession of 2001 and the Great Recession of 2007-09. Over the same period, China's GDP rocketed from $1.2 trillion to $10.3 trillion. Data compiled by Columbia University's Earth Policy Institute found that, at the global level, the world economy expanded about twice as fast in the last 15 years than it did in a similar period following the recession of 1973, when the falling rate of profit in the Western industrialized countries did indeed usher in a period of stagnation.

This doesn't mean that the tendency of the rate of profit to fall has ceased to operate. On the contrary, it has remained a chronic problem in European countries since the financial crash of 2008, even allowing for the notoriously difficult task of adapting mainstream economic statistics to a Marxist analysis of profits.

The point is that the proximate cause of current economic problems wasn't simply a continuation of 1970s stagnation, but of new contradictions built into the restored dynamism of the world system since the late 1980s. The Great Recession and the weak recovery that followed represent the inevitable hangover that follows a big capitalist boom--an expansion that has reshaped the world economy in fundamental ways.

The solution to capitalist crisis is always to let weaker capitals go bust to clear the way for a restoration of profit. That's what happened in the U.S. auto industry, for example--carmakers have enjoyed record profits in recent years as a smaller number of lesser-paid workers have become more productive.

More generally, however, the big stimulus packages and ultra-low interest rates since 2007-09 have had the effect of boosting the economy--but postponing the kind of shakeout that would needed to restore strong growth in the U.S., Europe and Japan. Plus, the Chinese industrial expansion has exacerbated the crisis of overproduction worldwide--and this is, indeed, putting downward pressure on manufacturing profits world.

Now, the slowing China economy--the main engine of the world economy in recent years--is dragging down the developing world, too, especially oil exporters.

Are we headed for another crash?

From a weak recovery to a new recession?