Danny Katch and Alan Maass look at the results from Iowa and what they mean.

HILLARY CLINTON and Bernie Sanders may have ended up in a tie in the Iowa caucuses, but the winner of the first primary contest for the Democratic presidential nomination was the socialist from Vermont.

Sanders was dismissed as a well-meaning but irrelevant protest candidate for much of last year, then smeared for being too radical when he surged in opinion polls. But the heir of a political dynasty and anointed choice of the Democratic establishment, who was thought to have Iowa wired for victory a year ago, couldn't beat him.

Sanders' showing in a "heartland" state against overwhelming odds is further evidence of the massive discontent with the political status quo in the U.S.--and proof that the myth of America as an essentially right-wing society is just that: a myth.

The results of the Republican caucuses in Iowa show a different face of the discontent with the status quo. Texas Sen. and Tea Party favorite Ted Cruz upset the frontrunner in opinion polls, Donald Trump, to win the GOP contest, and Florida Sen. Marco Rubio nearly pushed Trump into third place. Both Cruz and Trump claim to be right-wing renegades, opposed to the conventional Republican Party establishment. 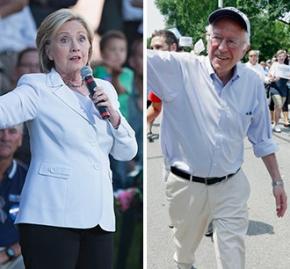 Cruz's victory is the start of what is certain to be a long bruising battle for the Republican nomination.

But the more unexpected outcome is that the Democratic race will be drawn out, too. Sanders will almost certainly win the next primary in New Hampshire in a week's time. He's still a long shot to win the nomination of a party whose leaders are dead-set against him. But his campaign--based on calling attention to widening inequality, growing poverty and social injustice--is changing the shape of Election 2016.

YESTERDAY WAS supposed to be the day that Hillary Clinton and Jeb Bush--remember him?--took the first steps toward coronation as the next in line for the American throne.

Days after Barack Obama's re-election in 2012, Politico reported that both Clinton and Bush had a cadre of backers who were already discussing 2016 before the votes were tallied on Election Day.

Two years later, Politico quoted Wall Street executives licking their chops at the prospect of a Bush-Clinton election. "If it turns out to be Jeb versus Hillary, we would love that, and either outcome would be fine," one Republican-leaning Wall Street lawyer confided to a Politico reporter over lunch.

But the party insiders and Wall Street executives have lost their confident grip on this election.

On the Republican side, the first- and second-place finishers in Iowa, Ted Cruz and Donald Trump, are generally loathed by party leaders. Not because the GOP establishment objects to either one's right-wing fanaticism, including their sickening racism and sexism, but because their open bigotry harms the image of the first party of American capital--and, probably more importantly, because both are willing to stab any other Republican in the back if it helps them get ahead.

Marco Rubio did much better than expected in Iowa, nearly pushing Trump into third place. That might be enough to make him the unity candidate for the party's leadership to rally behind.

There's a long way to go before the Republican convention, and plenty of time for Rubio or some other conventional candidate to take down Cruz and Trump. But for now, it's a telling symbol of U.S. politics today that the frontrunners for the Republican presidential nomination are two maniacs despised by the leaders of their party.

BUT AS strange as that may seem, the shape of the Democratic contest after Iowa is more surprising in certain respects. In a state where she was supposed to have superior organization and endless resources, Hillary Clinton, the Wall Street favorite and long-presumed nominee, couldn't stop a formerly little known Vermont senator and self-described democratic socialist.

When Sanders announced he would seek the presidential nomination last spring, it was a clear and welcome sign of the discontent with the two-party status quo in general--and the triangulating, neoliberalified Democratic Party in particular--when he got huge crowds at his rallies and recruited hundreds of enthusiastic volunteers.

But pretty much no one--Socialist Worker included--guessed that the wave of discontent could lift him to more than perhaps a single victory in New Hampshire, next to his home state of Vermont.

Now, Sanders' near-victory in Iowa--and the impressive $20 million that his campaign raised in January, mostly from small donations--gives him a chance to win over the voting blocs in Southern states that dominate Super Tuesday primaries on March 1, where Hillary Clinton has been expecting to lock up the nomination.

Like the Republican race, it wasn't supposed to be this way. When Sanders first announced, the infinitely better funded and better connected Clinton almost welcomed him into the race--on the assumption that he would make his fiery speeches about economic inequality and energize the party's liberal voting base, which would ultimately fall in line behind the "inevitable" nominee. After all, Sanders himself promised that he would support whoever the Democrats nominate for the presidency, and oppose any third-party independent challenge.

But the Sanders crowds kept growing. When the Democratic National Committee seemed to unfairly punish Sanders' campaign over a mailing list controversy, it galvanized supporters with a clear example of how the party leadership tilts the scales toward its preferred candidate.

In January, with Sanders continuing to rise in the polls in Iowa and nationally, panic set in. There was a wave of attacks on the Vermont socialist from leading Democratic liberals and media commentators. Sanders was criticized for a range of positions, from health care to fighting racism, but the overall message was that his identification with socialism and talk of a "political revolution" made him non-viable in the general election.

THESE ARTICLES were the first salvo of what will be many directed at left-leaning voters--demanding that they be "realistic" and support the strongest possible Democrat to defeat the greater evil of the Republicans in the fall.

The most direct and well-known application of the logic of "lesser evilism" comes in general elections pitting Democrats against Republicans. But the Democratic establishment wants its voters in the right mindset for the primaries, too--as the prime argument for why they should vote for the "pragmatic" choice, even though Hillary Clinton represents the kind of compromising that the party's base is fed up with.

These pleas for "realism" are a remarkable statement about how the political system is rigged to preserve the status quo.

"In real life," claimed Bloomberg's Jonathan Bernstein in a typical article, "all politicians in the U.S. political system are going to come up short of their promises--not because they're corrupt, but because the system is designed to favor of the status quo. Incremental change is all that is possible."

This conventional wisdom is exactly why Sanders has generated so much excitement--his campaign represents hope for the opposite.

Over the coming weeks and months, some Sanders supporters may be persuaded to give in to "real life" and back Clinton--but many others will be bolstered in their conviction that a system designed to favor a rotten and unequal status quo truly does need the "political revolution" Sanders is calling for.

Sanders' victory has demonstrated a deep dissatisfaction with the status quo--and an openness to radical talk of socialism and revolution, even when they're used to describe far-from-revolutionary political positions that more closely resemble the Democratic Party's liberal past. And that's not to mention issues like foreign policy, where he is indistinguishable from conventional mainstream Democrats and even a few moderate Republicans.

Still, Sanders' showing in Iowa blasts open the lie that America is a fundamentally conservative country--as will happen again if Sanders wins, as expected, in New Hampshire next Tuesday.

Even with a big win in New Hampshire, Sanders is still the underdog. The primary schedule is frontloaded with Southern states where Sanders will be starting from well behind--even further than he was in Iowa.

Then there's the stark fact that one in seven votes at the Democrats' convention to nominate a presidential candidate go to "superdelegates"--unelected party insiders most of whom are already pledging their support to Clinton.

Sanders will come under even more frenzied attacks from the party establishment, with plenty of well-known progressive voices enlisted for the cause. There will be an increase in slander and outright lies--but mostly an intensification of the lesser evil argument.

THE MORE they attack Sanders and the more they rely on their insider advantages to give Clinton an edge, the more party leaders will show that there is nothing democratic about the Democratic Party.

House Minority Leader Nancy Pelosi couldn't have made that clearer when she declared that there is "no use having a conversation about something that's not going to happen." She was referring to Sanders' popular proposal for single-payer health care, a far superior system to the disastrous Obama health care law.

But Pelosi and Co. are making it clear that the "party of the people" won't fight for a real transformation of the U.S. health care system.

"God bless all the people who have gotten enthusiastic," Pelosi condescendingly smirked about Sanders supporters. "The fact is that Bernie Sanders is enlarging the universe of people who are paying attention to the election, and we hope that he will bring them to the polls in November to support the Democratic nominee."

Pelosi expects Sanders to demonstrate loyalty to a party whose leaders and ideological mouthpieces are shouting for all to hear that they wouldn't support Sanders' policies if he somehow did become the Democrats' presidential nominee.

And unfortunately, Sanders has made it clear from the beginning of his campaign that if he does lose the nomination, that's just what he'll do--support the Democratic nominee, rather than turning his campaign into an independent run or supporting a genuine left-wing candidate like the Green Party's Jill Stein.

In the most unpredictable presidential election in at least a generation, there are undoubtedly more twists to come. Sanders may continue to mount a strong challenge and provoke bitter conflict within the Democratic Party--while the Republicans potentially coalesce behind a consensus candidate.

Or Clinton could take firm control of the race after the "Super Tuesday" primaries and caucuses, forcing Sanders supporters to ask themselves if they are going to follow their candidate behind support for Clinton, or try to continue the fight for a political revolution that he promised.

But for now, the biggest news of the night--bigger than Ted Cruz's "upset" or Donald Trump's underwhelming total or Marco Rubio's surge--was that a democratic socialist candidate fought the previously presumptive Democratic nominee to a draw.