Blue is not beautiful

"ALL LIVES Matter" is good propaganda. Sure, the slogan used by everyone from liberals to the right wing as a scolding response to the call to make Black lives matter is simplistic and deceptive. But it's the tried-and-true simplistic deception of "colorblindness"--the ideology that has helped drive the post-civil rights movement backlash for decades.

But in the wake of the shootings of cops in Dallas and Baton Rouge, the fury of conservatives can't be sated by the smug moralism of "All Lives Matter." As speaker after speaker at the Republican National Convention (RNC) in Cleveland rages against the Black Lives Matter movement, it's the harder-edged "Blue Lives Matter" slogan that gets the crowd fired up.

When pro-police forces started demanding that "Blue lives matter" after the shooting of two New York City cops in late 2014, it seemed redundant, given that politicians and corporate media outlets were giving the slain officers days of nonstop adulation that Black victims of police never receive. It also seemed a little clueless--like office managers who insist that employees "celebrate" Boss's Day on October 16. 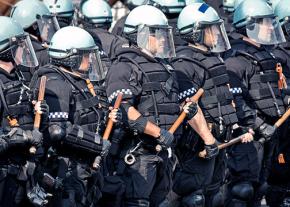 But it's neither of those anymore. The shootings in Dallas and Baton Rouge have added momentum to the wave of "Blue Lives Matter" bills calling for any violence against police to be regarded as hate crimes--legislation has now been introduced in Congress and statehouses across the country.

One such law was already enacted this past May in Louisiana--where, of course, it did nothing whatsoever to deter Gavin Long from deciding to open fire on Baton Rouge cops, killing three and wounding several others.

Many of the speakers in Cleveland use "All Lives Matter" and "Blue Lives Matter" interchangeably, not seeming to mind that one completely undermines the other.

You can't dish out the "Who me? I don't even see race!" bullshit behind "All lives matter" while simultaneously singling out and elevating an entirely new race of Blue People. More like a super-race, actually, of heroic beings far more noble and brave than the wimps and scum they walk among--or at least that's how they and their champions regard them.

There's a hidden truth in the first two words of "Blue Lives Matter" that many of its users probably don't intend. Counterposing Blue lives to Black ones acknowledges that the cops really are set apart. They're obviously not a race unto themselves--whatever race even means--but definitely a separate caste in American society with its own culture and laws.

THIS IS a reality recognized not just by right-wingers but politicians across the ideological spectrum, including Democrats who express sorrow for victims of police violence but do nothing to win justice in their names. Instead, Barack Obama and Hillary Clinton talk about the need to "bridge the divide" between police departments and African Americans.

This supposedly evenhanded approach confuses what should be a simple matter--cops shouldn't get away with killing unarmed people, whether their actions are videotaped or not--into a complicated clash of two cultures that need to overcome their differences and find common ground.

It calls to mind the patronizing and bogus histories often used to explain away wars and conflicts in other parts of the world: "Oh, well, you know the Blues and the Blacks have been fighting for as long as anyone can remember. It's an age-old conflict."

Radicals have always criticized the liberal attitude that police brutality isn't systematic, but instead is merely a matter of a few "bad apples" that need to be removed from the barrel. But today, liberals like Barack Obama and New York City Mayor Bill de Blasio refuse to even go after the bad apples, retreating instead behind empty calls for dialogue.

Meanwhile, as Democrats are driven by their own inaction toward--whether they admit it or not--acknowledging the "Blue Lives" logic that cops operate by their own set of rules, they are undermining another traditional liberal ideal: community policing.

The dream of cities being patrolled by friendly beat cops who are part of the neighborhood fabric was always based on an imagined past that never existed in poor and working class neighborhoods. But community policing is even harder to promote when you're talking about cops and Black people being separate tribes.

"Blue Lives Matter" laws should cause many to question their previous support for hate crimes legislation as a way to fight oppression. These laws haven't prevented increasing attacks on Latinos, Muslims and LGBTQ people. What they have done is give the government a new tool to entrench police power.

Then there's the question of what "Blue Lives Matter" laws are intended to accomplish. Louisiana already had enhanced penalties for assaulting a police officer--as do most other states. And it's a safe bet that people arrested for attacking cops are prosecuted with extra vigor in all 50 states.

THE ONLY tangible outcome of passing a "Blue Lives Matter" law is to encourage a crackdown on perceived threats to Blue People--like protests against police violence and even angry social media posts.

Since the familiar "colorblind" ideology of "All Lives Matter" has failed to slow the spread of anti-racist protests, "Blue Lives Matter" is becoming the rallying cry for those who want to shut down Black Lives Matter, using the claim that the demonstrations themselves are fomenting anti-police violence.

If anything, the truth is probably the other way around, as my friend Dom Renda noted the other day on Facebook:

The shooting of cops in Louisiana and Texas have occurred despite, not because, of the Black Lives Matter movement. People resort to violence when they don't have a peaceful outlet of protest, or if they feel that outlet is not effective. There's an irony in conservatives blaming Black Lives Matter for these shootings, because if Black Lives Matter didn't exist, there would have been more violent conflicts with cops already.

There's no equivalency between these two "BLM"s. The history of American protest movements from abolition to civil rights proves Alicia Garza's famous point that "when Black people get free, everybody gets free."

By contrast, the more that police are "freed" from any laws or restraints, the less freedoms any of the rest of us have.

And as long as cops aren't ordinary citizens with the same rights and responsibilities as you and me, but are instead made into a super-race of Blue People, then I don't mind saying that I'm an anti-Blue racist.

I don't like the way they dress, with their Storm Trooper body armor and Darth Vader face shields.

I don't like the way they keep multiplying--New York City hired 1,300 more cops last year even though crime is at historic lows--and bleeding government budgets dry so that actual crime-fighting measures like after-school programs or creating more public-sector jobs can't be funded.

And I really don't like the way that even the supposed "good ones" won't speak out against the violent extremists in their midst who are killing Americans at a rate of once every eight hours.

The point is that not only should there be fewer Blue People--which can be accomplished by cutting bloated police budgets--but ultimately, there should be no Blue People at all. We need a society where there is no separate caste of people operating above the law that they're charged to enforce.

Let's not back down in the face of the right-wing "Blue Lives Matter" backlash that says we should all just get along. Let's unite behind the Black freedom struggle--and against the Blue wall trying to hold it back.