Arkansas speeds up its death machine

Lily Hughes of the Campaign to End the Death Penalty reports on Arkansas’ cruel acceleration of executions, and why no execution method is "humane."

ARKANSAS IS poised to add a grisly twist to the horror story that is the death penalty, after Gov. Asa Hutchinson ordered prison officials to carry out seven executions in just 11 days.

The state plans to execute two prisoners at a time over a series of days--Don Davis and Bruce Earl Ward on April 17, Ledelle Lee and Stacey Johnson on April 20, Marcel Williams and Jack Jones Jr. on April 24 and Kenneth William on April 27.

Williams was also supposed to have a partner in the death house, but Jason McGehee was granted a reprieve from execution this week.

The state is rushing to carry out this series of barbaric double state-murders because its supply of the execution drug midazolam is about to expire. Drugs for use in executions have become extremely difficult for states to procure.

For many years, states bought drugs from pharmaceutical companies in Europe, but in the last decade abolitionists waged a successful campaign to stop European companies from selling these drugs for executions. Supplies started to dwindle, and over the last few years, many states have resorted to desperate, and sometimes illegal, methods to procure them. 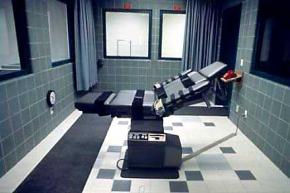 Texas went from administering a three-drug execution protocol to just one drug, trying out a few different drugs in the process. When they still had trouble obtaining drugs for use in executions, they turned to unregulated compound pharmacies in Texas. Soon, those pharmacies became unwilling to involve themselves in the execution controversy. In October 2015, federal authorizes seized a shipment of drug sodium thiopental purchased by Arizona and Texas from abroad, arguing that importing it was illegal.

MEANWHILE, OTHER states have brought back archaic execution methods.

Utah revived the firing squad in 2015, the same year that Oklahoma passed a bill authorizing the use of the gas chamber for executions. In the era of lethal injection, these old methods of execution appear grossly macabre. Yet despite its appearance as a sanitized and quasi-medical execution method, lethal injection is as barbaric as all the rest.

Introduced in the late 1970s by an Oklahoma state medical examiner as a less painful execution technique, lethal injection was never approved by the FDA, much less subject to any clinical trial. In fact, a 2012 study by researchers at Amherst College showed that it was the most error prone of any execution method.

The new drug protocols adopted by states, which includes experimenting on death row prisoners with a variety of drugs, has led to a series of gruesomely drawn out executions. Midazolam has been included in several of these executions, including the grisly execution of Clayton Lockett in Oklahoma in 2014. Lockett reportedly writhed in pain on the table, while officials attempted to halt the execution. Lockett died on the execution table over 40 minutes after the execution began. Midazolam was implicated in botched executions in Ohio and Arizona in 2014.

None of this has given pause to Hutchinson however. Discussing the use of midazolam, he recently told NPR, "In order to fulfill my duty as governor, which is to carry out the lawful sentence imposed by a jury, it is necessary to schedule the executions prior to the expiration of that drug."

Arkansas hasn't carried out an execution in 12 years, and hasn't previously used midazolam in its execution protocol. Nor has it carried so many executions in such a short time. In fact, the state is having a hard time rounding up the required number of witnesses for the executions, leading Department of Corrections Director Wendy Kelley to ask members of a Little Rock Rotary Club to volunteer.

Predictably, a number of the men slated for execution in this horrific plan have serious issues in their cases. One man is diagnosed as bipolar, another as schizophrenic, and two others meet the threshold for intellectual disability. Others, like Ledell Lee, have claims of inadequate representation during trial and post-conviction. These issues are further complicated by the fact that in Arkansas, clemency appeals can't be initiated until the execution date is set.

"In some of these guys' cases, [the deadline] was, like, 10 days from the day they learned they had an execution date," public defender John Williams told NPR.

ARKANSAS IS proposing this spate of executions at a critical time in death penalty history. Support for the death penalty has fallen dramatically over the last two decades.

Botched executions and challenges to lethal injection protocol are just one part of this declining support. The number of innocent people released from death row, including a series of campaigns around high-profile death penalty cases like that of Troy Davis in Georgia who was executed in 2011, have helped spark a national conversation about the death penalty.

Over the last few decades, abolitionists have successfully highlighted the role that racism and class bias has played in the application of the death penalty. A growing number of states have abolished the death penalty--19 as of 2017. Of the states that have the death penalty, 17 haven't had an execution in more than five years.

The number of death sentences carried out has also dropped dramatically in almost every state--including Texas, the "belly of the beast" for executions. In 2016, 20 people were executed in the U.S., down from a high of 98 in 2000, which was the most in a single year since the death penalty was reinstated in 1976.

The decline in support for and use of the death penalty in the U.S. has led many to conclude that the death penalty is dying--but a handful of states are bucking the trend. If Arkansas succeeds in its plan to carry out this gruesome series of executions, it will join states like Oklahoma and Texas that are fighting tooth and nail to maintain an outmoded and barbaric system.