The crisis spreads past Wall Street

THE LATEST government statistics on unemployment and other indicators show that the center of the worst economic crisis since the Great Depression is moving from Wall Street to "Main Street"--and it only promises to get worse.

The Department of Labor reported in mid-October that new jobless claims over a four-week period reached 478,000, a 44 percent increase from a year earlier. The 400,000 mark in jobless claims is often seen as a sign of recession.

The figure was bigger than Wall Street analysts had predicted, and the stock market took another dive on the news. But this time, Wall Street is reacting not to news of another bank in trouble, but the fact that the financial crisis has metastasized into the so-called "real economy."

Each round of new job losses is making the situation worse, said Robin Blackwell, chief economist for the AFL-CIO. "As people lose their jobs, they cut back on consumption," Blackwell said, pointing out that each round of layoffs sets the stage for another.

As Reuters summarized, "Shock waves from the global financial crisis are now being felt in almost every corner of working America as companies press the eject button on increasing numbers of employees." 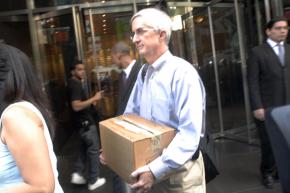 Companies in New York appear to have "ejected" the largest number of workers. The state accounted for more than 5,000 new unemployment claims filed during the week of October 11, due to layoffs in construction, services and transportation. State officials in Illinois report that unemployment went up--again--in each of the state's 12 metropolitan areas.

Nationwide, payrolls have declined for nine months straight, excluding agriculture. According to the statistics, there was a net decline of 159,000 jobs in September, with at least 760,000 jobs lost in the first nine months of 2008.

The trend evident in federal statistics was confirmed by a recent survey of more than 100 corporate executives by CFO magazine. More than half of these bosses report plans to cut payrolls further. A majority predicts a decline in revenues for the year, and similar numbers say they want to cut "operating expenses" by at least 5 percent.

Already in September, the number of "mass layoff incidents"--involving 50 or more workers--reached a level not seen since the September 11, 2001 attacks. According to the Bureau of Labor Statistics (BLS), employers "took 2,269 mass layoff actions"--an increase of 497 from the previous month. Manufacturing accounted for 28 percent of these.

When they come out early next month, October jobs statistics are likely to show an employment decline of at least 200,000, say analysts--and there will be more in the months to come.

The situation is even more dire in the automobile industry. General Motors said it would shut down plants in Wisconsin, Michigan and Delaware, cutting more than 5,000 jobs. Chrysler plans to shed 1,825 manufacturing jobs, and will make a further cut of 25 percent cut among its salaried workforce, or around 4,000 white-collar workers. And if the proposed GM-Chrysler merger goes through, an estimated 40,000 more jobs would be wiped out. In the case of a bankruptcy at GM or Ford, far more jobs would be lost throughout the economy.

Other manufacturers are implementing big cuts. Danaher, which manufacturers Craftsmen tools, said it would shut down 12 factories and lay off 1,000 workers. Brunswick Corp., which makes recreational boats, will close down seven factories.

The financial sector--the epicenter of the crisis--has already seen thousands of job cuts. Now even the surviving Wall Street investment bank, Goldman Sachs, will soon cut 10 percent of its staff, or around 3,300 jobs.

The next wave of job cuts is likely to be in the retail sector as consumers pull back from spending. For example, Best Buy plans to cut its holiday hiring by 10,000 workers.

And the crisis extends into the public sector, hitting state, county and municipal governments that are already constrained by years of neoliberal tax cuts and falling revenues. Massachusetts, for example, recently announced plans to slash 1,000 jobs.

The severity of the crisis shows more clearly than ever that the official nationwide unemployment statistics--which still stands at 6.1 percent, representing 9.5 million jobless--dramatically undercounts the true extent of joblessness.

First of all, the BLS, which tracks unemployment, uses a number of faulty "economic models" that distort jobless data. These models make assumptions about job and population growth, and factor them in with actual job numbers.

Since employers are not only laying off workers, but also scaling back (or stopping altogether) new hiring, the number of "discouraged workers" will only grow--adding to the poll of hidden pool of the unemployed.

Finding a new job is becoming harder and harder. New job openings have contracted by an average of 74,000 per month over the past 12 months--dropping by 214,000 in August compared with July.

The grim labor market will also impact those who don't lose their jobs, creating an environment where employers can increase the intensity of work (forcing their remaining workers to work harder and harder), as well as reduce hours and wages.

No wonder fear is spreading throughout the labor force. According to a CBS poll released on October 23, 35 percent of Americans are "very concerned" that either they or somebody in their household will lose their job in the next 12 months. Concern about job loss is at its highest level since 1996.

ALL THIS should underline that the economic crisis--as bad as it is already--is still in the early phases and just beginning to hit workers and the broader economy beyond Wall Street.

Even the increasingly discredited "oracle" of neoliberalism, former Federal Reserve Chair and libertarian kook Alan Greenspan, had to acknowledge that unemployment is likely to get much worse. "Given the financial damage to date," he said, "I cannot see how we can avoid a significant rise in layoffs and unemployment."

And with the economic floor falling out from under workers, there is very little left of the tattered social safety net to catch them as they fall.

Meanwhile, workers can no longer rely on going into debt (via credit cards and home refinancing) to temporarily make ends meet in a personal crisis. Banks are making it much more difficult to get money.