Big donors are covering most of the tab for Barack Obama's inauguration festivities--as they did for his election campaign, it turns out.

THE ECONOMIC news was dominated last week with the grim report that the U.S. economy shed nearly 600,000 jobs in December, for a total of 2.6 million jobs lost over the past year.

But there was still one special "growth industry," centered in Washington, D.C.: The inauguration celebration for Barack Obama.

According to Charles Andrews writing for the MRZine Web site, as of January 6, Obama's presidential inaugural committee had asked for and received more than $27 million in donations--and that number didn't include donations of less than $200.

Almost $18 million of the total came from fewer than 400 people, who each donated the maximum of $50,000. In addition to Bill and Melinda Gates, others who forked over $50,000 include executives from "ExxonMobil, Sony BMG Music, military contractor mogul Henry Crown, Fletcher Asset Management, Stephen Spielberg's DreamWorks, Coca-Cola, the Royal Bank of Canada and a bunch of corporate law firms," wrote Andrews.

Corporate interests like these don't care about the making of history when an African American is sworn in as president--they're interested, as Andrews wrote, in "access to the Obama administration, a nice seat at the table." 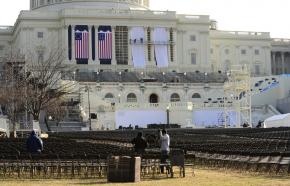 These deep-pocketed donors to the inauguration might seem to be a contrast to the election campaign, when the Obama team boasted about the huge numbers of "small donors" who gave $10, $20 and $50 to support their candidate.

Back in April, Obama said: "We have created a parallel public financing system where the American people decide if they want to support a campaign, they can get on the Internet and finance it."

But it turns out there's more to these claims than meets the eye. Included in its estimates for "small donors" were people who may have donated multiple times--in some cases, bringing their total contributions up to the $4,600 legal limit.

The sheer number of small donors who contributed to Obama's campaign is still an impressive figure. But not as impressive as the $210 million that Obama raised from "bundlers" and large donors who gave $1,000 or more.

They're the ones who will expect a special seat at Obama's table--not only at the inauguration, but in the months to come as well.