Too late and way too little

Barack Obama's latest proposals will only bolster the right's dominance in Washington.

THE FEEBLE inaction of the Obama administration in the face of one of the worst unemployment crises in the last 75 years could be summed up with two numbers from his "economic development"--please, don't call it a stimulus--proposals unveiled this week.

$200 billion: That's what Obama is proposing for...tax breaks for Corporate America, so businesses can fully deduct the cost of new capital investments.

There you have it in a nutshell: The Obama White House throws together a last-ditch please-don't-call-it-a-stimulus proposal, nakedly aimed at mobilizing support for Democrats in the November elections, and without a hope in hell of passing Congress as long as a single Republican senator can breathe the word "filibuster."

And Obama still proposes four times more money for corporations that are doing fine than for a government program that would create actual jobs, though only a fraction of what's needed. 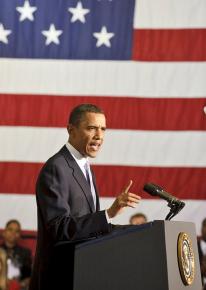 The worst economic crisis since the Great Depression is dragging on for workers and their families, if not the banksters. But the Obama administration remains devoted to the discredited economic policies--hysteria about budget deficits, tax cuts fraudulently promoted as a way to spur growth, strangulation of government programs that help working people--which set the stage for the crisis in the first place.

The money to finance an actual economic stimulus program, with its top priority on creating jobs for the nearly one in five working Americans who are unemployed or underemployed, would be easy to find--by raising taxes even fractionally on the rich, by closing the gaping loopholes that corporations exploit, by cutting spending on the U.S. war machine.

But we won't be seeing any of those solutions from a Democratic president whose top priority has been serving big business--not unless the Democrats and Republicans alike face an upsurge of struggle outside Washington.

THE WHITE House tried to work up some fanfare around the please-don't-call-it-a-stimulus proposals, but even if they were to miraculously pass in a Congress geared up for the coming elections, they wouldn't accomplish much.

The administration is proposing even more corporate tax cuts at a time when government at every level is starved for revenue.

Of course, the write-offs are supposed to encourage corporations to make new investments, which, in theory, would create private-sector jobs. But as numerous economists point out, that outcome is far from certain--because private businesses don't have to devote a tax windfall to hiring more workers, any more than the big Wall Street banks had to use their taxpayer-funded bailout to start lending again, which they didn't.

On the contrary, with consumer demand lagging and the threat of a double-dip recession in the immediate future, corporations will continue to resist creating jobs.

What's more, Obama's proposals for business tax write-offs come at a time when corporations are paying so little in taxes to begin with. According to a Government Accountability Office report issued last week, more than half of U.S. companies and nearly three-quarters of foreign-based corporations paid no federal income taxes for at least one year between 1998 and 2005. Around half of the corporations managed the feat for two years during the period.

This is the secret about the federal budget deficit that no mainstream politician in Washington, Republican or Democrat, will utter: The problem isn't runaway spending on programs that benefit working people, but the fact that the government has been starved of revenue.

The federal government debt is huge, and it creates all kinds of complications for U.S. imperialism when the ongoing deficits are financed by a rising economic and military rival like China. But the real cause of the debt problem is twofold: huge increases in military spending and the transformation of the U.S. tax structure over a period of two decades.

No one in the Washington political or media establishment will open their mouths about the "hard decisions" that could be made on those issues.

Half a century ago, corporations paid one-third of the tax revenues taken in by the federal government--and they still managed to be profitable under this dreadful burden. Today, they pay less than 10 percent.

On top of this, the federal income tax system has been reshaped, too--culminating in the $1.3 trillion in tax cuts enacted under George W. Bush, whose benefits went overwhelmingly to the very richest Americans. Today, the tax rate on income in the highest bracket--personal or household income above $373,651--is 35 percent, a level that Republicans ritually denounce as oppressive. But between 1951 and 1963--the height of the era of postwar prosperity in the U.S.--the tax rate on the top bracket was over 90 percent.

Letting the Bush tax breaks for the super-rich expire, as they are due to already after this year, would pay for the $50 billion infrastructure program and plenty more besides--and that's not to even raise the prospect of a tax increase on the rich.

Obama and the Democrats have been promising for years that the Bush tax breaks for the richest taxpapyers would be allowed to lapse. But incredibly, they may cave even on this. Peter Orzag, the former head of the White House Office of Management and Budget and one of Obama's top advisers, wrote in the New York Times this week that the Bush tax cuts should be extended for two more years, including for the richest few.

AS FOR Obama's $50 billion infrastructure investment proposal, it's chump change.

Early leaks from White House officials about the please-don't-call-it-a-stimulus plan pegged new spending at "hundreds of billions" and included rumors of a payroll tax holiday. But the White House press office put an end to that with a statement: "There have been a lot of reports and rumors on different options being considered--many of which are incorrect."

When Obama finally announced the infrastructure proposal, liberal New York Times columnist Paul Krugman, who has been pleading for a stimulus measure, wrote that it was "a good idea," but: "It's much too small...[and it] won't pass anyway--which makes you wonder why the administration didn't propose a bigger plan, so as to at least make the point that the other party is standing in the way of much-needed repair to our roads, ports, sewers and more--not to mention creating jobs."

Actually, that's giving the administration too much credit for a "good idea." Right after Obama took office, the Democrats passed a $787 billion stimulus bill that included $139 billion for spending on infrastructure projects. But one year after the stimulus legislation was signed into law, the administration had spent only $17 billion of the money allocated for infrastructure.

The Obama White House is so desperate to avoid any association with programs that could be labeled "big government"--even though the Republicans are certain to do so anyway--that they won't even call new proposals a "stimulus" measure.

Why? The president and his poll-obsessed advisers are convinced that they can't be seen as proposing more government spending that adds to the deficit, since that's supposedly a top concern for voters. Thus, after announcing the $50 billion proposal in a Milwaukee speech, Obama was quick to add: "This is a plan that will be fully paid for and will not add to the deficit over time--we're going to work with Congress to see to that."

Of course, with no one in the White House or Congress countering the Republicans' lies about out-of-control spending, it's little wonder that people do tell pollsters they're worried about the deficit.

But even this carefully nurtured sentiment is breaking down. A Newsweek poll in late August found that 57 percent of people think Washington policymakers should put a higher priority on federal spending to create jobs, versus 37 percent who thought deficit reduction was more important.

As the November election approaches, there will be many calls from liberals--including those who have been critical of Obama's performance--for those who supported Obama in 2008 to shake off their disillusionment and turn out for the Democrats in order to stop the greater evil of Republicans making big gains in Congress. We'll hear a lot about what would happen if the Republicans can capture a majority in one of the houses of Congress and use it to obstruct the Democratic agenda.

But the Democrats have proven over the past two years what their agenda looks like when they have full control over the White House and big majorities in Congress--and it's hard to see what they can claim as real accomplishments that benefited working people.

The answer to the economic crisis won't come by mobilizing to keep the Democrats in power in Washington. It will depend on grassroots struggles and political activity that poses an alternative to the status-quo political system in Washington.