Democrats are as responsible as Republicans for the right-wing climate in Washington.

THE DOGMAS and delusions of conservatives and Corporate America are still dominating national politics--and their most effective advocate has turned out to be a Democratic president.

That's the conclusion we drew from President Barack Obama's State of the Union address. The man who not long ago was derided as a "socialist" by the right wants to "make America the best place on Earth to do business" and to work with Republicans to shrink the deficit with a five-year freeze on federal spending--non-security-related spending, that is.

Are we exaggerating? After all, Obama served up his proposals with appeals to tolerance and rhetoric about helping those in need. He said that the real measure of the success of the economy wasn't the stock market but "the success of our people."

Plus, sitting in the audience in Congress was the new Republican majority in the House--their snarling about "job killing" and "anti-business" policies temporarily quieted by the spotlight on Obama's speech and the calls for more "civility" following the Arizona shootings. 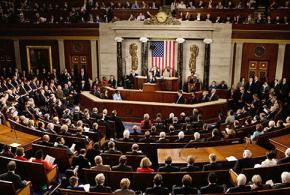 Compared to the union-hating, immigrant-bashing, budget-slashing Republicans, Obama can't help but seem progressive and reasonable. And that's been his strongest appeal for the millions of people who voted for him two years ago and are disappointed today--at least he's not them.

The media recap of the State of the Union speech will portray the national "debate" on an incredibly narrow spectrum, with Obama and the Democrats as the left-most extreme and the Republicans as the right. But this misses the fact that Democrats and Republicans agree on so much more than they disagree--and that both parties have dragged the debate to the right.

In fact, Obama's speech was filled with the same tired phrases heard over and over from Republicans and Democrats alike: "[T]he challenges we face are bigger than party." "Our free enterprise system is what drives innovation." "Every day, families sacrifice to live within their means. They deserve a government that does the same." "[T]he American people deserve to know that special interests aren't larding up legislation with pet projects." "[L]et us speak with one voice in reaffirming that our nation is united in support of our troops and their families."

Cover up the name, and you could easily imagine those quotes coming from not only Bill Clinton, but Ronald Reagan and George Bush, Senior or Junior. This teaches an important lesson about mainstream politics--about how the two-party system contains sentiment for real change and reinforces a status quo where the interests of the business and political establishment are preserved, whichever of the two parties are in charge.

Two years ago, the enthusiastic support for Barack Obama, despite the evidence of his thoroughly mainstream views, was about what he was--a symbol of the possibility of a new direction and new priorities in U.S. politics. Today, what support he retains is about what he isn't--a fire-breathing Republican.

That will be the Democrats' strongest argument in the months to come--anyone who criticizes Obama from the left will be told they're ignoring the fact that things would be worse if the president wasn't there to blunt the Republican assault. Don't like Obama's five-year spending freeze? Well, isn't that better than the slash-and-burn proposals from House Budget Committee Chair Paul Ryan?

But if the last two years prove anything, it's that the "lesser evil" in office is producing both lesser and greater evils. The way out of the "lesser evil" trap lies beyond the two-party system--in movements of ordinary people organizing for justice.

IT TAKES an effort to remember the transformed political climate after the November 2008 election--with the celebration not only of the end of the hated Bush regime, but of the victory of the first African American president in a country founded on slavery.

Time magazine captured the expectations for the new administration with a cover image that superimposed Obama's image onto Franklin Delano Roosevelt's--with the headline "The New New Deal."

Obama did win passage of a $787 billion economic stimulus package after his first month in office. But while unprecedented in size, it was underpowered compared to what was needed to pull the economy out of crisis. And though the stimulus is portrayed by Republicans as out-of-control spending, it was chump change compared to the trillions of dollars that flowed into the coffers of the big banks, courtesy of the Federal Reserve.

But at the same time as the stimulus was passed, the Obama administration remained in thrall to many dogmas of the past. When the crisis continued to drag on--even as profits came roaring back for the banks and Corporate America--Obama refused to champion anything even approaching a "New New Deal." On the contrary, the administration came up with warmed-over neoliberal solutions at best--like tax breaks for businesses to create jobs, even when it was clear that corporations weren't hiring no matter how good profits got.

Obama's failure to take decisive action on jobs gave the Republicans--an irrelevant minority in both houses of Congress when Obama took office--an astonishing opportunity. Right-wingers who never missed an opportunity to attack the poor and serve the rich got to pose as defenders of the working Americans who were left out in the cold while the new administration continued to bail out Wall Street.

When the debate began on health care reform--the centerpiece initiative of the administration's first two years--Obama made it clear with the guest list to his first White House summit that any legislation would have to be acceptable to the health care industry.

That meant any genuine reform proposal--like a single-payer system where the government provides coverage to everyone--was "off the table." Even half-measures like the "public option" for the uninsured were bargained away in the face of industry hostility. The final legislation contains limited regulations to end some of the worst insurance industry practices--but it will also increase the power of insurers by forcing millions of people to buy inadequate policies from private companies.

The role of the Republicans in all this was the other side of the coin to the Obama administration's concessions. Though it seemed completely out of step with public sentiment at the time, the Republicans' fanatical opposition to all reform served business interests by further marginalizing more radical proposals--and by undermining support for even milder measures with a campaign of distortion and lies.

This year's "debate" over the health care law is following the same dynamic. The new Republican majority in the House passed a bill to repeal the health care law altogether. But this is a symbolic act--the Senate, still with the Democrats in charge, is unlikely to even hold a vote on repeal, and Obama would veto the legislation in any case.

But the repeal charade further reinforced the concessions made to business--with the Obama administration declaring it would "discuss" changes to the law on Republican terms.

So the pharmaceutical-medical-insurance complex gets a law that helps it in all kinds of ways, with the prospect of weakening still further the provisions it doesn't like. And the one segment of public opinion that will get no hearing at all in this "discussion"--even though it's the largest single segment, according to recent polls--are those who think that the health care law should be changed to further reform the system.

It's become the logic of U.S. politics: The right wing captures the initiative with wild and reactionary rhetoric, and the Democrats concede half the way or more--until the "middle ground" has been pushed far enough that Corporate America and even most Republicans are satisfied.

So it was with the big issue of the lame-duck session of Congress after the November election--repeal or extend the Bush tax cuts for the small fraction of the richest Americans who enjoy a bonanza worth tens of thousands of dollars every year.

Republican defenders of the "little guy" suddenly forgot their hostility to Wall Street bankers and took a hard line calling for an extension. Obama and the Democrats complained and conceded, complained and conceded some more--until the final deal became exactly what the Republicans had been demanding all along: a temporary extension on all the tax breaks, including for the super-rich.

THE SHIFT to the right in mainstream politics has taken place almost across the board. Tellingly, the only partial exceptions were on issues where people mobilized a show of support for the kind of change Obama's election seemed to promise.

In the first year of Obama's presidency, for example, the struggle for LGBT equality reached a new level of mobilization and organization. Last year, the immigrant rights movement mobilized large numbers against Arizona's SB 1070 racial profiling law and inaction in Washington--including a wave of militant protests in favor of the DREAM Act, legislation to provide limited legalization for some undocumented youth.

Even these important struggles weren't strong enough. The "don't ask, don't tell" policy barring LGBT people from serving openly in the military was finally overturned, but on a conservative, pro-military basis--and efforts to overturn the anti-gay Defense of Marriage Act and pass the Employment Non-Discrimination Act covering LGBT people failed. The DREAM Act came to a vote in Congress, but the measure was cynically tied to funding for the Pentagon war machine, and the Republican minority in the Senate had enough Democratic backing to block the bill.

Nevertheless, these movements show what's needed--pressure organized from the grassroots to demand change. What we need is a stronger mobilization, both numerically and politically--and more movements.

The deteriorating conditions facing U.S. workers are creating the potential for these struggles to burst out.

The drive for austerity at every level of government is leading to unprecedented attacks on social programs and on unions representing public-sector workers, from our schools to public health care and beyond. The bitterness that these assaults have stoked has already been translated into action on a small scale in cities around the country, as a look at the Movement News section at SocialistWorker.org shows. The question is whether these struggles can develop, link together and pose a broader challenge.

Many of the fightbacks that take place will be against the outrages of the right--whether in the form of pro-corporate, anti-worker policies pursued by Republican politicians, or bigotry and hate directed at scapegoats, from immigrants to Muslims and more.

Some of the people involved in these struggles will remain convinced that Barack Obama is on their side--and most will believe that the Democrats are at least a lesser evil compared to the Republicans. The struggles themselves will teach them lessons about the role of the government and the state, and where their own power lies. So it's important for activists who have come to more radical conclusions about the Democrats to not exclude those who haven't.

But at the same time, the last two years show how important it is for the left wing of our movement to insist that we not tailor our demands and activities to the requirements of supposed allies in Washington who are anything but.

One important lesson for the movements of the future was expressed most brilliantly by the great radical historian Howard Zinn, who died a year ago this week:

There's hardly anything more important that people can learn than the fact that the really critical thing isn't who is sitting in the White House, but who is sitting in--in the streets, in the cafeterias, in the halls of government, in the factories. Who is protesting, who is occupying offices and demonstrating--those are the things that determine what happens.