Gary Lapon looks at a trend among employers to bar the unemployed from seeking jobs--and why such discrimination is a built-in part of capitalism.

HERE'S THE latest perverse story from what's being called the "jobless and wageless recovery": Significant numbers of employers are openly discriminating against unemployed job seekers.

No, that's not a typo. According to "Hiring Discrimination Against the Unemployed," a study by the National Employment Law Project (NELP) published in July:

U.S. employers of all sizes, staffing agencies and online job posting firms are using recruitment and hiring policies that expressly deny employment to the unemployed--simply because they are not currently working. In other words, at a time when the competition for jobs is extraordinarily intense--with nearly five unemployed job seekers for each new job opening--some businesses and recruitment firms are telling would-be job seekers that they can't get a job unless they already have a job.

Employers are blatant about this discrimination, which is legal in every state except New Jersey. The NELP report cites language in ads placed by large corporations such as Allstate Insurance and the University of Phoenix, which that applicants "must be currently employed." Other employers require that unemployed applicants have been recently employed. 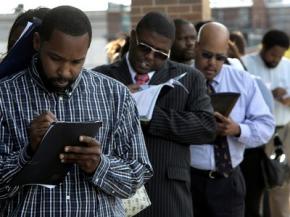 Discrimination against the unemployed is especially devastating in the midst of a jobs crisis in which U.S. workers face rates of long-term unemployment worse than any period since the Great Depression. According to the Christian Science Monitor, "6.18 million or 44.4 percent of all unemployed workers" have been jobless for longer than 27 weeks, with an average of over 40 weeks on unemployment for these workers.

This bias is also a pernicious, albeit formally indirect, form of racial discrimination. According to the U.S. Bureau of Labor Statistics, seasonally-adjusted unemployment for African Americans stands at 15.9 percent, compared with 8.1 percent for white workers. For Latinos, unemployment is also disproportionately high, at 11.3 percent.

Unemployment is a constant feature of capitalism, even in boom times--and the millions of additional unemployed workers are out of work today not because there was a sudden outbreak of laziness among U.S. workers, but as a result of the financial crisis of 2007-8 triggered by widespread fraud and excess on Wall Street.

Such reasoning highlights the utter disregard for human need that is systemic to capitalism. To bosses driven only by the profit motive, workers are expendable. Rather than provide an opportunity for the unemployed to get back on their feet, the system chews workers up, and then puts them out to pasture when they are no longer deemed useful.

VARIOUS non-governmental organizations, including USAction and Color of Change, have launched petitions encouraging Monster.com, a leading job search website, to stop posting ads from employers who discriminate against the unemployed.

Democrats also have introduced legislation in the House and Senate, the "Fair Employment Opportunity Act of 2011," which would prohibit discrimination against the unemployed in hiring and in job postings.

According to a poll conducted by the NELP, such legislation has the support of some 63 percent of respondents, and 90 percent consider discrimination on the basis of employment status to be unfair.

However, even this goes too far for some. Steven Yarusinsky and Daniel L. Saperstein, lawyers at the New Jersey law firm Proskauer Rose, attacked the proposed the Fair Employment Opportunity Act in a recent Washington Post article.

After shedding the obligatory crocodile tears over the high rate of unemployment, Yarusinsky and Saperstein argue, "First...[b]anning unemployment discrimination would equate an often fleeting status with a permanent condition or trait, trivializing the underlying purpose behind discrimination law to prohibit employment decisions made on account of considerations such as race, for which there is never legitimate justification."

This is absurd on its face, given that nearly half of the currently unemployed have been without a job for over six months. And given that those discriminated against on the basis of race are disproportionately represented among the unemployed, far from "trivializing" their rights, additional protections for the unemployed would disproportionately benefit those who already face discrimination for other reasons.

But Yarusinsky and Saperstein continue:

Second, to analogize unemployment status to other protected classes opens the door for the creation of many more such classes--potentially clogging the nation's courtrooms with frivolous lawsuits...employers will have no choice but to expend valuable resources and time--otherwise invested in the workplace--seeking legal counsel to avoid harsh penalties.

This illustrates that what is bad for employers, whose interests the authors represent, is good for workers, and vice versa. Whether or not anti-discrimination protections for the unemployed will lead to protections against other forms of discrimination (and this is hardly a bad thing for the millions of oppressed people facing discrimination in this country) is irrelevant to the issue at hand, which is the injustice of discrimination on the basis of employment status.

Also, employers could avoid lawsuits simply by not discriminating against job applicants. Given that corporations are currently hoarding records amount of cash, it's difficult to feel too sorry for them potentially having to shell out some of it for legal fees. Of course, Yarusinsky and Saperstein do not express the same sympathy for the unemployed--who tend to lack the money with which to hire lawyers to file frivolous lawsuits.

Finally, while acknowledging that today, many are "unemployed through no fault of their own," the writers argue against anti-discrimination protections because "in good and even troubled economic times, long bouts of unemployment may bespeak a bad work ethic or some other improper behavior--a legitimate consideration for any employer."

In other words, they argue against protections from discrimination for the unemployed because such discrimination provides employers with a means to weed out potentially undesirable employees. If some unemployed but qualified workers are unfairly excluded as a result, so be it.

THESE ARGUMENTS against the Fair Employment Opportunity Act, which would begin to address a basic and deeply unpopular injustice for which there is currently no recourse in any state other than New Jersey, reveal the truth behind a fundamental myth propagated by apologists for capitalism.

However, to borrow the criticism so often leveled at socialists by capitalist ideologues, this "sounds great in theory, but doesn't work in practice." Anyone who has ever looked for a job and jumped at the first offer because they needed to make rent that month, or stayed at a job they hated because they needed the health insurance, knows what a lie this is.

As Karl Marx wrote in Capital, under capitalism workers are "free...in the double sense": they are not slaves or serfs, but they are also "free from...any means of production of their own." In other words, while workers are not bound to any individual exploiter, because workers lack the means to produce on their own, they must sell themselves to some capitalist in order to survive. And not even that is guaranteed, a fact illustrated by the record levels of long-term unemployment in this time of crisis.

Capitalists and their mouthpieces like Yarusinsky and Saperstein oppose any and all checks on their power; they know the game is rigged, and they will do whatever it takes to keep it that way, no matter what the cost in human terms.