The death penalty system is set up to hide the horrific conditions facing prisoners--conditions that function to dehumanize prisoners, forcing them to give in and accept the injustice being done to them.

Rob Will, an innocent man on Texas death row framed for the murder of a police officer, has inspired activists throughout the world for standing up to the system and fighting back. Along with Kenneth Foster Jr. and Gabriel Gonzalez, Rob co-founded the Death Row Inner-communalist Vanguard Engagement (DRIVE) Movement.

DRIVE members' nonviolent resistance within the heart of the death penalty beast, in collaboration with the anti-death penalty movement on the outside, won an amazing victory last August in stopping the execution of Kenneth Foster.

Here, Ragina Johnson from Rob Will's defense committee interviews Rob about his case and the founding of DRIVE.

WHAT ARE the details of your case? Do you feel they're unique?

BRIEFLY, ON December 4, 2000, in an area on the north side of Houston, Texas, several others and myself were in the vicinity of two stolen cars that were in the process of being stripped. Police came, and we all ran. A Harris County Deputy Sheriff was shot and killed by another person. I was the only one apprehended.

I was arrested later that day in a town outside of Houston. I refused to work with detectives, and despite extremely harsh interrogation techniques, I never gave a statement or "snitched" on the others who were with me.

After a terribly unfair trial, I was convicted and sentenced to death, despite evidence--which wasn't properly presented--proving my innocence, including:

The fact that officer call-log transcripts confirm that I was handcuffed when the shooting occurred.

The person who actually committed the murder--who happens to be the son of a well-known and well-connected police officer--confessed to at least five different people. 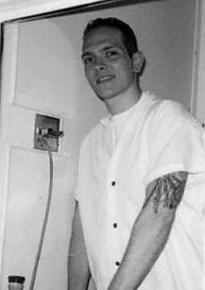 My gloves, hands and clothes tested negative for gunpowder residue.

In some ways, my case and trial are unique. For example, the head district attorney, Chuck Rosenthal, prosecuted me himself, and the courtroom was packed with police officers, creating such a mob atmosphere that the judge had to order the doors locked. I should mention that Rosenthal was recently forced to resign due to a scandal involving racist and sexist e-mails, pornography and evidence of illegal campaign finance activity found on his work computer.

However, my case and trial are symptomatic of larger problems with the criminal justice system, the prison industrial complex and society as a whole.

One only needs to look at prison, where one in nine young Black males reside, to see that racism is a reality. This system is inherently racist and does not take kindly to white folks who are not.

Plus, this system, of course, is classist--my case highlights this fact, but is by no means an exception to the way the criminal justice system functions on a daily basis. From the point of arrest, through trial and on into the appeals process, the cards are stacked against anyone who doesn't have hundreds of thousands of dollars to hire an experienced legal team or perhaps be lucky enough to get pro bono attorneys involved with their case.

For more information about Rob Will's case and how you can help with his defense campaign, go to the Free Rob Will Web site. You can watch a video of a direct action conducted by Rob in August 2006 and the vicious use of force by prison guards in response.

For more information on the death penalty and the struggle to end it, see the Campaign to End the Death Penalty Web site. Articles from the Campaign's newsletter The New Abolitionist are available on the site.

I've essentially had no appeals process. My court-appointed appeal attorneys have filed nothing more than pitiful appeals. My state habeas attorney merely copied the appeal of Angel Maturino "The Railroad Killer" Resendez and turned it in as mine. It was, of course, quickly denied, and I haven't been able to find any good pro bono attorneys willing to help me.

WHY DID you co-found DRIVE?

MORE THAN anything, oppression and injustice founded DRIVE.

Kenneth Foster, Gabriel Gonzalez and myself were all moved to the same housing section around the same time. We were all involved in various forms of organizing and activism before, but when we got around each other, we started discussing our individual world views and found that we shared a deep burning desire to fight for a better world.

We quickly went from igniting a spark to creating a small and righteous subterranean fire of resistance here on Texas death row. We all had similar mindsets, we remained focused and came together to form DRIVE.

The direct material conditions of our environment also had a lot to do with the forming of the movement. Things were getting worse and oppression breeds resistance. Being locked in a small cage for 22 to 24 hours a day (and only let out to a larger cage for "recreation"), constantly deprived of sleep, unable to touch another human being, fed disgusting food, and having to face a host of other means designed to break the human mind and body is nothing less than torture, and we decided to take a dramatic stand against this oppression.

Also, several of our friends who we knew were innocent had received execution dates, harassment by individual officers was on the rise, and it seemed that the anti-death penalty movement was stagnating.

It's important to note that the formation of DRIVE didn't just suddenly happen; we put in a lot of work. Kenneth, Gabriel and myself were spending 10 to 12 hours some days coming up with a strategic plan, while keeping in contact with others like Reginald Blanton (who was on another pod) and getting their input.

It was like we were having a weeks-long "Resistance on Death Row Conference" or something. We were literally having days-long discussions and engaging in dialectics on how we could apply lessons learned from everything from the Foco theory that grew out of the Cuban Revolution to Gandhi's Satyagraha movement, to just about every other social justice movement or theory one can imagine.

We realized that we had to reach out to organizations fighting the death penalty on the outside as well as other political groups, and work in tandem with them. This system likes to operate in the dark so we went about creating the DRIVE Web site to shed light on the reality of the death penalty and the conditions on Texas death row.

It would be counterproductive for me to expose our tactics and strategies in an open forum that is subject to the prying eyes of prison officials, but we have been very effective in improving the conditions here and strengthening the abolition movement as a whole.

WHAT DID the victory for Kenneth Foster mean to you and your comrades on Texas death row?

I CAN remember shedding deep tears of happiness only twice in my life. Once was when my son was born, and I saw him breathe his first breath. Second was when I heard that Kenneth's sentence was commuted.

Not only was I overwhelmed with a deep sense of inspiration, relief and happiness because a personal friend and comrade of mine wasn't murdered by the state, but also because Kenneth's commutation proved that grassroots activism can and does work.

I was in consistent contact with main organizers of the Save Kenneth Foster Coalition, hearing from them and/or meeting with them on a weekly basis. I saw what they did. I witnessed firsthand how they built a solid grassroots campaign from the ground up and showed that community organizing works, even in the arch-conservative state of Texas.

The state is not omnipotent. We can be victorious. Kenneth's victory was not his alone, it belongs to all of us on death row and everyone involved in the abolitionist movement on the outside. Kenneth's commutation showed us all that if we struggle, we can win.

YOU OFTEN talk about how struggles are interconnected. Can you explain this more?

WE REALLY have to look at the intersections of oppression from not only a state or national, but an international perspective. The parallels are endless. The military, petrochemical and prison-industrial complex are intimately intertwined--they are the health of the state that, through foreign and domestic policy, is responsible for the social ills facing working-class people worldwide. War funding is draining the community of taxpayer money that could be used to build a strong and sustainable social network that prevents the causes of crime. Billions go to Israel every year to fund apartheid against the Palestinians. The poor in Iraq are suffering the most. The poor in the U.S. are the ones in the prisons and on death row. The death penalty and prison issues are working-class issues just like the war in Iraq and the struggle for Palestinian liberation, labor and immigrants' rights are. This is why Eugene Debs said that as long as there's a lower class, he'd be in it, as long as there's a criminal element he'd be of it, and while there is a soul in prison he'd never be free.

Also, those on the right like to spew their rhetoric about this supposed "culture war" we're in--and perhaps we are indeed in a culture war. But our enemies, the enemies of the working class aren't "Islamofascists," "those pushing the homosexual agenda," the "illegals," or other favorite fantastical enemies of the right. Our real enemies are those like the Bush regime and their neo-con supporters who seem hell bent on shredding the Constitution, fervently attacking civil liberties and human rights and destroying the livelihood of everyone who isn't in their ruling class worldwide.

We're also fighting against North America's thriving and ever-expanding love affair with violence. In order to advance the process of healing humanity, genocidal wars, and U.S. support of oppressive regimes, the death penalty and all other forms of state-sponsored violence must be seen as morally unacceptable by the masses, who do have the power to change foreign and domestic policy.

WHERE IS your case at now and what can people do to support your struggle?

I'M AT the last stage of the appeals process, the federal level. My federal habeas writ has already been filed.

For years I never really focused on my case. I always focused on anti-death penalty, prisoner rights, and other activism as a whole. At this point, I really need to publicize my case as well as the work we're doing here on death row. I need all the solidarity I can get. An easy way people can help out my campaign is to go to my Web site, www.freerobwill.org, and download my 'zine to get the word out about my case.

I need to live so I can continue to fight. My defense committee was only formed about a year ago and consists of only a few people. They're overwhelmed with work and could surely use help. They also run the DRIVE site by themselves and need help with that as well.

As we've seen, the state has wasted no time in fervently pursuing execution dates since the Supreme Court ruling on lethal injection. Now is the time for increased action. Anyone interested can drop me a letter or e-mail me and we can make change happen, not just for myself but for the overall struggle that we're all engaged in.