Closing down our child care

Trish Soto explains what the recent closing of a child care center on Chicago's West Side has meant for low-income parents.

PARENTS AT Little Giants Child Care Center received a life-changing letter from their child's teacher as they and their preschool children were welcomed into the center early in the morning on January 9. The letter from the executive director announced the closing of the center after 12 years of providing free, full-day child care for low-income parents in West Garfield Park on the West Side of Chicago.

The center received a majority of its funding through Chicago Public Schools' (CPS) Community Partnerships Program. Other sources of funding came from the Illinois Action for Children program, a service that offers subsidized child care and early education for low-income parents.

For 12 years, Little Giants had provided exceptional pre-school education. The center was not just a dumping station for working-class parents; it prepared young children cognitively and socially. Children participated in field trips to the Field Museum, Malcolm X College and a water park. Children and parents worked on projects together, such as constructing a family tree and a Thanksgiving project on gratitude. 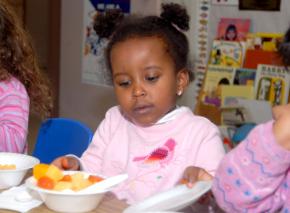 But the fate of Little Giants Child Care Center changed in April 2013 when CPS, along with its approval of 50 school closures, announced that it was also pulling funding from its Community Partnerships Program. Little Giants was on the list.

Further dampening the center's situation, it lost more funding to its Head Start program when the government shutdown in October 2013. During the 16-day shutdown, funds were cut off for what the government called "non-essential," services, which included Head Start and the Women, Infants and Children (WIC) program.

Even though the center suffered severely due to these cuts, its executive director maintained that services would continue until further notice.

In the meantime, the center scrambled to find other sources of support and applied for funding through Easter Seals and Chicago Youth Centers (CYC). According to one of the center's teachers, it was not enough--when CYC refused to release funds for five months, the center's executive director decided to sustain the center through her own retirement fund.

Life in the time of austerity

A SocialistWorker.org series focusing on the impact of neoliberal policies on the day-to-day lives of working people.

LITTLE GIANTS Child Care Center was recommended to me by a family friend who made regular visits there as a social worker.

When I had previously inquired at a child care center very close to my home in the summer of 2012, it charged $200 a week. As a part-time worker, full-time student, and a full-time single mother, it was beyond unaffordable--it was ridiculous. I stopped looking for private child care and relied on my brother as a caretaker when I was working or in school.

Parents around the country face a similar situation. According to the National Association of Child Care Resource and Referral Agencies, in 31 states and the District of Columbia, the average annual cost for infant care is more than a year's tuition and fees at a four-year public college. When child care is so hard to come by, many parents face tough choices in order make sure their children are cared for.

In February 2013, I found stable employment, though accompanied with low wages, and at the same time enrolled my son at Little Giants. At Little Giants, I had free quality child care.

I knew Little Giants was a quality center when I noticed my son's progress. He would come home singing songs, identifying letters and numbers, and telling me about his day. By the time the center closed, he was highly articulate; his teachers, my mother and I noticed his outstanding progress.

Located in a historically Black and low-income neighborhood, Little Giants Child Care Center provided underserved minorities with a real head start. Staff and teachers helped children and parents with the transition to kindergarten, and followed their progress during their first year.

With the closure of Little Giants, West Garfield Park's children have been dealt yet another blow from Rahm Emanuel, CPS and the capitalist system.

They put a price tag on women’s health